City’s hopes of progressing to the FA Cup fourth round for the first time since 1981 were dashed after a tepid display against a well-organised Sheffield Wednesday, so Matt Taylor’s side can now “concentrate on the league” and a packed schedule from now until May. Taylor will be wary of trying to end a run of mediocre form, just one win in the last six in all competitions being the 5-0 thrashing of Tranmere, albeit at a time when the schedule has been heavily disrupted by postponements. Randell Williams was conspicuous by his absence on Saturday, but rather than being a result of transfer speculation as happened with his absence at the start of the season, it was confirmed afterwards that the winger has 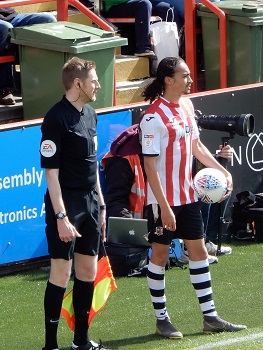 suffered a stress fracture which will keep him out for several weeks, joining Pierce Sweeney on the injured list. Otherwise everyone appeared to come through Saturday’s match unscathed, although with an eye on having to play twice a week pretty much every week Taylor will no doubt look to utilise his squad, meaning some rotation.

One could be forgiven for seeing City’s opposition and thinking there had been some odd occurrence leading to a re-entry into the FA Cup. For a number of years Bolton were Premier League stalwarts before financial problems led to a fall from grace, as a result, like Portsmouth and Coventry in recent seasons and perhaps Wigan next year, Bolton find themselves in the basement for only the second season in their history, and the first since 1987/88. While their off-field issues appear to be behind them following a takeover, it’s clear that the club needs to rebuild – to that end the Trotters appointed Ian Evatt, who guided Barrow back into the league, as their manager in the summer, and signed no fewer than 16 players plus a number of loanees. With such root and branch change it was perhaps unsurprising to see this lead to disjointed league performance, and Bolton go into Tuesday night’s match in 17th place with one win their last six – although that was at Cheltenham. Amongst their legion of signings were two strikers with a lot of pedigree – ex-Aston Villa man Nathan Delfouneso, and Eoin Doyle, who was a goal machine for Swindon last season. Doyle is Bolton’s top scorer this campaign with eight.

Tuesday night marks the first time in nearly 28 years since the sides last met, when for three seasons they were familiar foes in the third tier. The 92/93 season saw Bolton promoted while City narrowly avoided relegation, and the gulf in class was evident in the two meetings between the sides. Bolton thrashed City 4-1 at their old home of Burnden Park, while they also triumphed 3-1 at the Park. Those wins extended Bolton’s league head to head lead over City to 5-2, with three matches finishing level. Details of four of those matches can be found at https://www.grecians.co.uk/wordpress/?p=10633

Just the one game with SamAllsion in charge of City, the EFL Trophy game in September https://www.grecians.co.uk/wordpress/?sp_event=exeter-city-vs-forest-green-rovers-7