After an unusual prolonged break pre-Christmas due to Covid issues at Stevenage, City returned to action on Boxing Day with a good performance in a 1-1 draw with high-flying Forest Green, so after the dreadful defeat to Harrogate in their previous fixture, City will be in better spirits ahead of a trip to the division’s leaders. Problems abound in the right back position – Josh Key’s absence solved the mystery of who City’s Covid victim was, meaning Matt Taylor moved Pierce Sweeney across to fill in, only for the Irishman to tweak his hamstring. With Jake Caprice still feeling his way back from his own injury, Taylor will have no option but to start the summer signing from Tranmere. Expect changes elsewhere too – the use of only the enforced substitution of Caprice for Sweeney suggests Taylor is likely to rotate, with the likes of 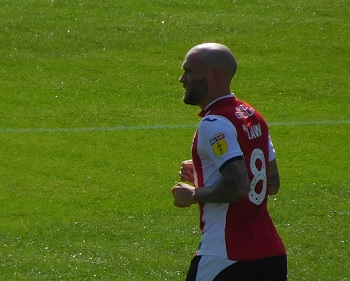 Nicky Law and Nigel Atangana perhaps being lined up to start in Wales. Good news elsewhere too with Lewis Ward back on the bench meaning both of City’s main keepers are now fit and available.

Having been in and around the promotion spots in recent years, the 19/20 season was one of comparative disappointment for Newport, dropping off the pace to be amongst the also-rans in mid-table. Despite some dissent amongst the supporters, the board at Newport kept faith with Mike Flynn, faith which appears to have been rewarded as the Exiles sit proudly at the top of the table, although a run of four matches without a win will be a worry to Flynn. Newport’s cup exploits have been to the fore again – an FA Cup 3rd round tie against Brighton awaits, while they were three minutes from beating Newcastle to set up an EFL Cup quarter final appearance before being pegged back, eventually going out on penalties. Goals have been shared around – Swindon loanee Scott Twine is the top league scorer with six, but overall joint top scorers with eight are Padraig Amond and former City loanee Tristan Abrahams. Scot Bennett will expect to feature against his former side, having scored his first goal of the season in the final game before Christmas.

The sides met three times last season with City winning twice – the corresponding league fixture finished 1-1, an Abrahams penalty cancelling out Lee Martin’s first half strike. It was Martin again who scored the only goal on Boxing Day at the Park, while a Matt Jay brace sealed the 2-0 group win at Rodney Parade. City haven’t won at Newport in the league since a stunning 4-1 win on New Years Eve 2016, which saw Ollie Watkins (whatever happened to him?) bag a hat trick. The sides are level in league head to heads with four wins apiece, six matches finishing level. Information in games against Newport can be found at https://www.grecians.co.uk/wordpress/?p=9735

John Busy has taken charge of four Exeter games, these can be viewed at https://www.grecians.co.uk/wordpress/?s=busby