After successive defeats last week in the league and EFL Trophy, City recovered in stunning style by thrashing Tranmere 5-0 on Saturday. Ryan Bowman has set a high bar for himself with hat-tricks in successive home league fixtures, the returning crowd will now be expecting him to bag the match ball every home game. Elsewhere Nicky Law missed the match having picked up a knock against Northampton, but Jake Caprice recovered to make a cameo against his former club as he seeks to put his injury-hit start to his City career behind him. If Caprice is fit to start on Tuesday night he may well do so, while there may also be starts for the likes of Nigel Atangana and Nicky Ajose should Taylor look to rotate his side to keep them fresh in what is a busy time. 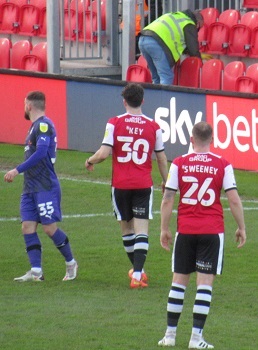 While Barrow and Bradford have parted company with their managers this weekend, that’s a fate that is unlikely to befall Simon Weaver, given it’s his father who does the hiring and firing as chairman. That said, given Harrogate’s incredible progress under Weavers senior and junior, the chances of him getting the bullet are remote in any case. For most of the club’s history Harrogate have been a club in the shadow of near neighbours York (think Tiverton and City), but the contrasting fortunes of the two clubs now see the club from the spa town two divisions above their more illustrious neighbours. Having clinched promotion to the EFL thanks to a stunning win over fancied Notts County at Wembley, Harrogate were expected to struggle, but a 4-0 thrashing of basement boys Southend on the opening day gave rise to hopes of a more solid season. Forced to groundshare at Doncaster for the first month of the season as they replaced their synthetic pitch with a grass one, Town’s fortunes have slipped more recently – they go into Tuesday night’s match in 17th place in the division having lost five of their last six in all competitions including a 1-0 reverse at Morecambe on Saturday. Harrogate will look to Jack Muldoon for goals, he has eight so far after scoring 14 last season. Aaron Martin (not the former City defender) will likely partner him up front, while veteran Jon Stead will probably see some action off the bench.

Tuesday night marks the first time the sides have met, so City will be hoping it’s a landmark occasion in more ways than one.

The will be Lee Swabey’s ninth game in charge of Exeter, details of those games can be fund at https://www.grecians.co.uk/wordpress/?s=swabey