City’s stunning win at Grimsby on Tuesday night ensured a tally of 13 goals in a week and ensured Matt Taylor’s side goes into a proper promotion six-pointer on Saturday the top scorers in the top four divisions. Jonny Maxted made his return to the side from injury in the only change to the starting XI from the previous league game, the 6-1 thrashing of Colchester, and Taylor is hardly likely to make wholesale changes to the side ahead of the trip to Cheltenham, with the EFL Trophy match on Tuesday the more likely fixture to see players rested. 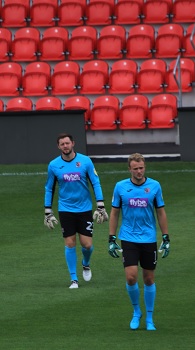 Following a better than expected season that saw them elevated to fourth ahead of City on points per game, only to fall short in the playoffs, Cheltenham were widely tipped to repeat the stunning success of 19/20, and the Robins have met expectations meaning Saturday’s match is one between two sides in great form and in the automatic promotion places. A shock defeat at home to Morecambe was one of four defeats so far (coincidentally two of them against Port Vale and Oldham, the only sides to beat City in the league this season), while recent form has been solid including a win over League One Crewe in the FA Cup. Michael Duff was relatively busy in the summer, one of his key signings being Liam Sercombe – the City academy product has chipped in with three goals across three different competitions, while another summer signing, veteran striker Andy Williams, is top scorer with five. While City are a good bet in the “both teams to score” coupon, Duff has again built his side’s success on a strong defence, with seven clean sheets in their first 15 games.

Although City’s visit to Whaddon Road was one that fell foul of the curtailed season, the sides did meet twice at the Park last season, the league match finishing 0-0 and City winning the EFL Trophy match 1-0 through an early Nicky Ajose strike. City’s record in recent years against Cheltenham has been decent, although Cheltenham do still have the edge in league head to heads with nine wins to City’s seven, three matches finishing level. Information on the encounters between the two clubs can be found at https://www.grecians.co.uk/wordpress/?p=9292

The match for officials for the game are:-

Robert Madley had been out of refereeing for a few seasons, and has now returned at a lower level, he’s refereed three Exeter games, the last one being Exeter’s win at Home Park in March 2015. Details of those games can be found at https://www.grecians.co.uk/wordpress/?s=robert+madley