November 2nd 1993. The last time City scored six in a competitive match before Tuesday night’s 6-1 humiliation of Colchester was a 6-4 rollercoaster against Fulham back when the late Alan Ball was at the helm. That stunning performance and result gives City renewed impetus after a first defeat in two months last Saturday ahead of a tricky FA Cup trip this weekend. Matt Taylor welcomed back Josh Key and Tom Parkes to the back line, which was timely given the injury to Jake Caprice against Oldham, while Nigel Atangana got some match time following his return to fitness. With yet more league action in midweek Taylor may shuffle his pack a little, the likes of Nicky Law, Atangana and Nicky Ajose could see starts as a result, while Jokull Andresson continues in goal as Lewis Ward performs a secondary role as club match report writer during his recovery from injury. 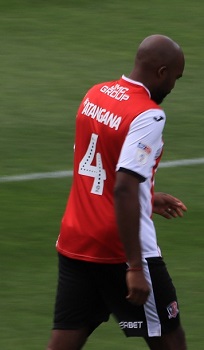 The FA Cup 2nd round is usually a fixture where you hope the draw lands you with a home tie against the lowest ranked side in the competition, given the potential bounty on offer for the victor, a potential tie against one of the global powerhouses of the sport. So when City were drawn to play established League One side Gillingham away from home, supporters’ hearts presumably sank. Managed by the colourful Steve Evans, the Kent side go into Saturday’s fixture in good form, unbeaten in their last five in all competitions following a run of five defeats. Evans was busy during the summer, utilising the loan market for six players while signing the likes of Vadaine Oliver, Jacob Mellis and Alex MacDonald. Jordan Graham is the club’s top scorer this season with six in all competitions, while another summer signing in Dominic Samuel scored twice in Gillingham’s 3-2 win over Woking (coming back from 0-2 down) in the first round.

City fans will take heart from the fact their last visit to Priestfield, back in November 2012, saw an against the odds away win as City defeated a Gillingham side that would seal promotion 3-2. Whelpdale gave the Gills the lead, Alan Gow’s free kick from roughly 150 yards out levelled things before Cureton put City ahead. Jackman equalised before Cureton sealed the win late on. The sides have met in the FA Cup before, but if any City fan tells you they were there they are probably lying, as it took place in the 1935/36 season. Gillingham won that tie 4-0, so there’s clearly 85 years of hurt to address.