All good things must come to an end, although it’s perhaps galling that City’s unbeaten run of two months was ended at home, and to a team struggling near the bottom of the table. There is no time to lick wounds, however, as the condensed schedule means City are back to playing twice a week for the time being, starting with a home match against a familiar foe. Matt Taylor suddenly has something of a selection crisis with Jake Caprice limping out of the Oldham match at half time – assuming Josh Key isn’t fit enough to take the field on Tuesday night Taylor is likely to move Pierce Sweeney to 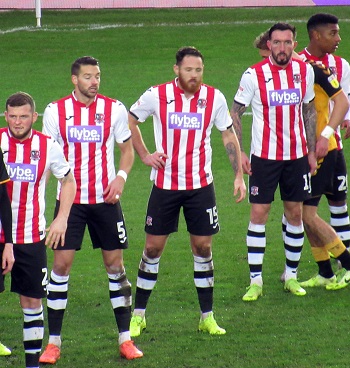 the right and bring Alex Hartridge in to start (again assuming Tom Parkes is also ruled out). Elsewhere any shuffling of the pack would likely be in the form of Nicky Law starting ahead of Matt Jay, while Nigel Atangana was on the bench on Saturday and may get some minutes. Jokull Andresson’s loan move is likely to be extended by another week.

Colchester go into Tuesday night’s long trip in decent form, unbeaten (in 90 minutes) in their last five matches and one defeat to high-flying Newport in their last eight. The Us also have an extra day’s rest in their legs having drawn 1-1 at Mansfield on Friday night. Steve Ball took over as manager after John McGreal left the club in the summer, and he had to cope with a number of departures including Frank Nouble, Brandon Comley and Luke Prosser. Ex-Cambridge man Jevani Brown is the key man so far with 11 goals in all competitions, while the likes of Callum Harriott and Harry Pell always catch the eye.

While City played a number of opponents only once last season, that was not the case with Colchester, who by dint of being City’s playoff semi-final opponents, they met four times. There was a fag paper between the sides throughout, as evidenced by the results and league placings. The match in Essex was a thriller, finishing 2-2. Jake Taylor put City ahead early on, but found themselves 2-1 down thanks to Pell and Robinson. Tom Lapslie saw red for a professional foul, 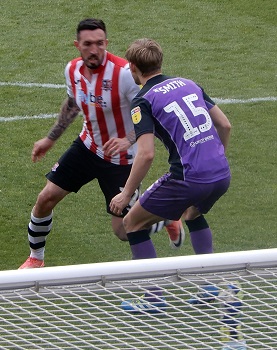 Bowman netting the resulting penalty to seal the draw. The return also finished level but without the same drama as the score was 0-0. Colchester gained the half time advantage in the playoffs by winning the home leg 1-0 thanks to a late Cohen Bramall strike, but this advantage was overturned after extra time as City won 3-1 in 120 minutes. Aaron Martin and Jayden Richardson put City ahead in the tie before Courtney Senior forced extra time, where Ryan Bowman’s drilled finish clinched City’s place at Wembley for the third time in four seasons. City have the lead in league head to heads with 29 wins to Colchester’s 25, 22 matches finishing level. The last 28 games can be viewed at https://www.grecians.co.uk/wordpress/?p=9529

Trevor Kettle has taken charge of 12 Exeter games, details can be found at https://www.grecians.co.uk/wordpress/?s=kettle