The hectic period of games drew to a close on Saturday with City narrowly beating plucky non-leaguers AFC Fylde in the FA Cup to extend their unbeaten run to 12 matches in all competitions, and Matt Taylor rewarded his tired side with a couple of days off this week in order to be fit and firing ahead of another run of multi-game weeks coming up. Taylor made a number of changes to his side for the FA Cup tie, with players like Archie Collins and Tom Parkes given the day off, and they will expect to return to the starting XI. The changes to the side last weekend also saw a change of formation back to the three man defence favoured by Taylor last season, although it’s expected he’ll revert back to a back four in order to accommodate the wealth of talent he has at his disposal on the flanks.

While City were having a hard time of it against an AFC Fylde side that expects to be back in the National League next season, Bradford’s trip to Tonbridge Angels was a breeze, the Bantams putting their Kent opponents to the sword in a 7-0 thrashing. That sits somewhat in contrast to their league form so far this season, with Stuart McCall (in about his 38th spell at the club as either player or manager) unable to find much consistency so far. Their last league match was also a comfortable win, 3-0 against a Southend side emerging as whipping boys currently. McCall has plenty of experience in his forward line, with a trio of Billy Clarke, Clayton Donaldson and Lee Novak, although the latter, currently top scorer with four goals in all competitions, hasn’t featured in the last few matches. Unlike City, Bradford were in action in midweek in the EFL Trophy, although as one might expect McCall played a fringe side in their 3-1 defeat to Oldham. 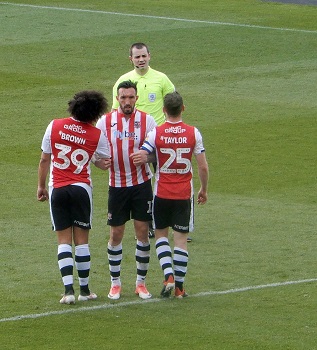 curtailment, and Matt Taylor will feel there is some unfinished business against a side he briefly played for. Bradford finished 2-0 winners thanks to goals from Oteh and Vaughan in a match City largely dominated, but the real story was of the match ending 10 vs 9. Jake Taylor could have no complaints about his red card, nor could Callum Cooke for Bradford, but Tom Parkes’ red was dubious to the point that for the first time since, if your writer recalls correctly, James Bittner in the 03/04 season when he was sent off for, er, handling the ball inside his area, City successfully appealed the decision. That win for Bradford ensured the sides go into Saturday’s fixture level in league head to heads with 15 wins apiece, 11 matches finishing level.

This is James Bell’s first season in the EFL, he took charge of the National League final at Wembley last season between Harrogate Town and Notts County.