Two of the division’s form teams go head to head in another early kick off on Saturday as City welcome Carlisle to the Park. Matt Taylor was able to solve his goalkeeping issue with the emergency loan signing of Reading’s Icelandic youngster Jokull Andersson, who put in an assured display in the 1-1 draw at Leyton Orient on Tuesday just hours after signing. His loan is initially for one week but this may be extended should neither Lewis Ward nor Jonny Maxted be able to return in 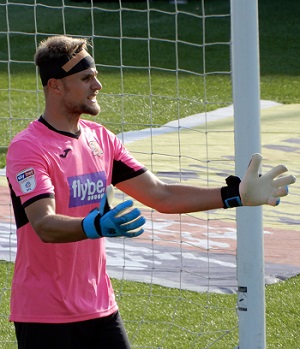 time for the Morecambe match next Tuesday. Elsewhere Jack Sparkes will continue at left back following Lewis Page’s hamstring injury, while Rory McArdle, previously expected to be a long term casualty, returned to the bench on Tuesday and may be fit to compete for a starting berth with Pierce Sweeney.

The pundits largely had Carlisle down to be mid-table at best, and three defeats across three competitions to start the season didn’t bode well for Chris Beech and his side. However, recent form has been very goo, and the Cumbrians make the long trip unbeaten in their last five matches. Jon Mellish heads the goalscoring charts with six in all competitions, while Paul Farman in goal was one of the few bright spots in Stevenage’s awful season before heading north in the summer. Another signing was Brennan Dickenson, but the player released by City in June has yet to feature having picked up an injury before the start of the season.

This fixture last season was one that fell foul of the Covid shutdown, while the match at Brunton Park saw City emerge victorious 3-1 – City led 1-0 through Lee Martin, they were pegged back by Olomola before Aaron Martin and Nicky Law clinched the points. City have the league head to head lead with 25 wins to Carlisle’s 19, 17 matches finishing level. Details of the last 37 games can be found at https://www.grecians.co.uk/wordpress/?p=10254

James Adcock has refereed four Exeter games, those games can be checked out at https://www.grecians.co.uk/wordpress/?s=adcock