For the second home game in four days City laboured to a win, but it’s three more points in the bag which is all that really matters against a Covid-hit Scunthorpe. Next up is another midweek match against a side that had Covid problems of its own earlier in the season. Harry Kite made his league bow in place of Jake Taylor, the latter coming off the bench to score the goal that sealed the points having had a busy week – scoring the equaliser on Tuesday then getting married on Wednesday. The skipper is set to return to the starting line-up, although Matt Taylor has bigger fish to fry elsewhere. Lewis Page pulled up with a hamstring injury on Saturday and will likely miss several weeks, with Jack Sparkes coming in for him, but the biggest issue was Lewis Ward picking up an ankle injury that, while he was able to complete the match, will also keep him out for a while. With Jonny Maxted also sidelined this leaves 15 year old Harry Lee as the only fit keeper unless Taylor is able to make a free agency or emergency loan signing before Tuesday. 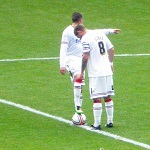 It has been something of a stop-start season for Ross Embleton’s Leyton Orient, with a Covid outbreak costing the Os a dream EFL Cup tie against Tottenham, which would have pitted Harry Kane against the club he sponsors (as a thankyou for the successful loan spell that launched his career). Recent form has been good, with successive away wins in the last week against Tranmere (1-0) on Tuesday and Stevenage (2-0) on Saturday. Danny Johnson has made a flying start to the season with eight goals in all competitions, while other players to watch include veteran Jobi McAnuff and Conor Wilkinson.

This was supposed to be the fixture that ended the regular season before the lockdown put paid to things, so the last time City visited this part of East London was in November 2016, at the time bottom of the league, and emerged 1-0 winners thanks to Ollie Watkins – a win that seemed to kick-start City’s incredible rise from bottom to playoff finalists. Last season’s match at the Park finished 2-2 – Sweeney gave City the lead but the Os fought back through Angol and Dennis before Nicky Law’s injury time penalty rescued a point. Leyton Orient hold a tight lead in league head to heads with 32 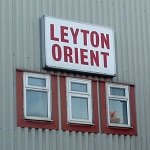 wins to City’s 31, 24 matches finishing level. Details of the last 31 encounters can be found at https://www.grecians.co.uk/wordpress/?p=10267

Rob Lewis has refereed eight Exeter games, they can be viewed at https://www.grecians.co.uk/wordpress/?s=rob+lewis