It was always likely to be the case after three inactive months and barely a couple of weeks of training, but the first leg turned out to be a tepid affair bar one moment of magic from Colchester to earn the Us the advantage heading into the second leg at the Park on Monday evening. Matt Taylor may be forced into changes for the return leg after Lee Martin and Jack Sparkes limped off on Thursday – Matt Jay and Brennan Dickenson would be likely to deputise although Taylor may look to freshen things up elsewhere by including the likes of Archie Collins or Jayden Richardson. 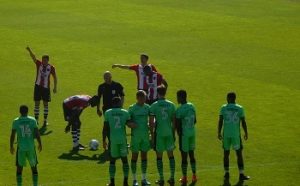 Colchester appear to have no new injury worries, the big question for John McGreal will be how he approaches the second leg. His side were effective in packing the centre of the pitch in the first leg, which meant City weren’t able to play through the middle, and with a slender lead to protect he may opt for a similar guarded approach in the return leg.

Matt Taylor may not be too perturbed about facing a deficit at half time – in all four playoff campaigns under Paul Tisdale City went into the second leg either level or behind and managed to come through on each occasion. Taylor himself played in one of those comeback wins, the 4-1 thrashing of Torquay at Plainmoor in 2008.

Match officials for this game will be

Charles Breakspear has taken charge of 14 Exeter games, the most recent being the December clash at Colchester. Those games can be found at https://www.grecians.co.uk/wordpress/?s=breakspear