City dropped out of the automatic promotion places on Tuesday night with a disappointing return of two draws from the two home fixtures in the past week which, added to the defeat at Northampton, means Matt Taylor’s side will be desperate to get back on track at a venue which hasn’t exactly been a happy hunting ground over the years. Taylor made three 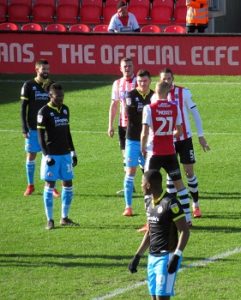 changes on Tuesday night in an attempt to find a winning formula and may be pressed into further changes especially as some legs may be weary after 180 minutes on a very heavy pitch at the Park. Nicky Ajose may return, while there may also be starts for the likes of Alex Fisher, Jayden Richardson and skipper Jake Taylor. Jonny Maxted is considered to be close to a return and may come back in given Lewis Ward (despite winning the MOM award against Crawley) has yet to keep a clean sheet since his return.

In their first season in the fourth tier since 2006/7 (when they stormed to the title in a solitary season in the basement) Walsall haven’t exactly pulled up any trees – worse, for a long time the Saddlers appeared to be flirting with relegation before recovering to mid-table obscurity. Darrell Clarke’s first season in charge has therefore not exactly gone according to plan, but his side are just starting to hit a bit of form with two wins and two draws from their last four matches, so any hopes City might have of an easy fixture are out of the window. Another thing to consider is that the weather put paid to Walsall’s fixture last Saturday so, while City have played twice since February 22nd, Walsall have been able to rest and should be fully fit. Much was expected of summer signing Caolan Lavery, who had a fruitful loan spell at Bury last season, but he has flattered to deceive with just four league goals, leaving Elijah Adebayo (six) as the club’s top league scorer for a side that has scored just 37 league goals.

Three of those goals came in a frantic first 31 minutes at the Park just before Christmas as Walsall raced into a 3-0 lead. However, by half time a Bowman braced had pulled it back to 2-3 before Lee Martin completed the comeback in the second half. The last time the sides met in the league at the Bescot in 11/12 City – who up to that point had failed to score in an away fixture – finally broke their hoodoo with a 2-1 win thanks to goals from Nardiello sandwiching an equaliser from future City player Alex Nicholls. That was, however, City’s first win at the Bescot, their previous win at Walsall coming in the 1980/81 season at their previous Fellows Park home. Walsall have the edge in league head-to-heads with 31 wins to City’s 25, just 11 matches finishing level. The last 17 encounters can be found at https://www.grecians.co.uk/wordpress/?p=10419