The Wembley dream is over after a dramatic defeat in the EFL Trophy semi-final on Tuesday night, although the plaudits earned by City’s youthful side bode well for the future. So Matt Taylor’s side can “concentrate on the league” from here on in (the U23 Cup competition notwithstanding), starting with a tough away trip to a side very much in the playoff picture. Jake Taylor and Nicky Law continued their returns from injury with starts against Portsmouth, giving Taylor a selection 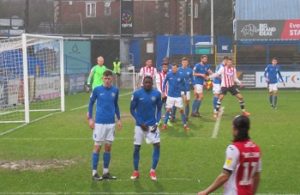 headache as Law’s replacement, Matt Jay, has shone since coming in. Elsewhere Taylor will also have to choose between Dean Moxey and fit again Tom Parkes, while the Ajose/Bowman partnership is expected to continue.

After a slow start, Northampton staged something of a recovery to move into the promotion mix, although three straight league defeats have tarnished this somewhat. The Cobblers’ home form had been imperious since October with nine wins and one draw before successive home defeats to Port Vale and Swindon this month. Further bad news came this week in the shape of top league scorer, the veteran Andy Williams, undergoing scans on an injury, meaning much will rely on Sam Hoskins (10 goals in all competitions) for firepower. Others to look out for include Nicky Adams, who shone under manager Keith Curle at Carlisle and remains a creative presence in Northampton’s midfield.

The reverse fixture was an enthralling encounter which City eventually won 3-2. Northampton went ahead through Goode before City went 3-1 up through Williams, Aaron Martin and Fisher before Hoskins set up a grandstand finish late on. Northampton won this fixture 2-1 last season, going 2-0 up through Pierre and Williams before Aaron Martin reduced the arrears. City have a horrendous record at Northampton with just one win (2013/14) since 1973, which is reflected in Northampton’s healthy league head to head lead, with 48 wins to City’s 29 (30 draws). Details of the last 21 encounters can be found at https://www.grecians.co.uk/wordpress/?p=9878

Martin Coy has taken charge of three Exeter games, details of those game at https://www.grecians.co.uk/wordpress/?s=martin+coy