For the fourth time in the various iterations of what was the Associate Members’ Trophy City find themselves at the semi-final stage, hoping to go one better for the first time. Matt Taylor has tended to use the competition to blood some of his youngsters and fringe players, but it remains to be seen whether he will adopt this approach with Wembley beckoning. Jonny Maxted’s injury means Taylor has to choose between Lewis Ward or youngster Jack Arthur, and it’s likely he will go with the more experienced head at Portsmouth. City head into the match having arrested a mini-blip 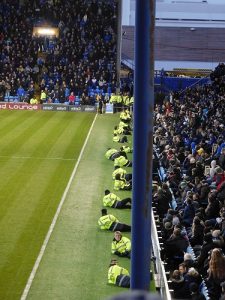 with three straight wins albeit having allowed struggling Macclesfield back into it on Saturday. Tom Parkes missed out on the trip having failed to recover from illness in time while Nicky Law was also absent with the knock he picked up against Stevenage.

Until a 1-0 reverse at Coventry last Tuesday Portsmouth were rivalling Liverpool for form in England – following a 1-1 draw at Gillingham on New Years Day Kenny Jackett’s side have won 10 of 11 matches since. As a result Pompey have moved into the promotion mix as well as competing in the latter stages of both this competition and the FA Cup, where they prepare to face Arsenal. Summer signing John Marquis took some time to get going but has been in decent form while Ronan Curtis has 13 goals in all competitions but has yet to feature in the EFL Trophy. Ellis Harrison is the club’s top scorer in this competition with three.

The sides have met in this competition before, City coming through 2-0 in the second half thanks to Ryan Harley’s penalty and Alex Nicholls. City were also victorious on their last visit to Fratton Park, David Wheeler continuing his record-breaking form with the only goal in January 2017.

Craig Hicks has refereed four Exeter games, details can be found at https://www.grecians.co.uk/wordpress/?s=hicks