City’s long run unbeaten and a clean sheet record dating back to last year came to an abrupt halt on Tuesday night, as Port Vale’s penalty equaliser opened the floodgates in a 3-1 reverse. One crumb of comfort for Matt Taylor was that Swindon were going down by the same scoreline to Colchester meaning no change at the top ahe 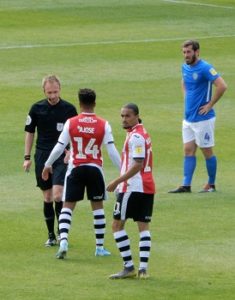 ad of Saturday’s promotion six-pointer, although Crewe are now within spitting distance. Nicky Ajose marked a second successive league start with his first league goal for the club, which may convince Taylor to keep him in the side assuming his fitness level can sustain it – especially as Ajose will be desperate to play against a club with which he enjoyed arguably his greatest success (35 goals in 72 games across three spells). Elsewhere Nicky Law and Randell Williams were benched presumably with Saturday in mind and will expect to return.

Swindon have been amongst the front runners all season and until a week or two ago seemed to be in tandem with City as runaway leaders. An up and down run in the last month or so, combined with the recall of their two free-scoring loanees Eoin Doyle and Jerry Yates, has given rise to thoughts that the Robins may be candidates to choke as the season draws to a close. However, Richie Wellens has been able to re-sign Yates ahead of the transfer deadline, so he will likely line up alongside either Kaiyne Woolery or recent signing from Carlisle Hallam Hope. Others to look out for include Michael Doughty and Keshi Anderson.

The reverse fixture back in August finished 1-1 – Matt Jay scored for City before Doyle equalised late on. Last season’s fixture at the County Ground saw City welcome 2019 with a New Year’s Day win, a Forte penalty and an Archie Collins thunderbolt sealing the points. In fact you have to go back to 1986 for the last time City lost in the league to Swindon – a season where the Robins broke the 100 point barrier in storming to the Division 4 title. Despite that excellent recent record it’s still Swindon with a healthy league head to head lead with 36 wins to City’s 25, 26 matches finishing level. Details of the last 16 of those games can be found at https://www.grecians.co.uk/wordpress/?p=9146

Kevin Johnson has taken charge of 13 Exeter games, a list of those games can be found at https://www.grecians.co.uk/wordpress/?s=kevin+johnson