There was seemingly no Manager of the Month curse bestowed upon Matt Taylor, whose City side extended their perfect run in 2020 to three wins in all competitions against a dogged Cambridge side, so it will be a battle of two sides in good spirits on Saturday when City make one of their longest trips of the season. Dean Moxey returned off the bench last 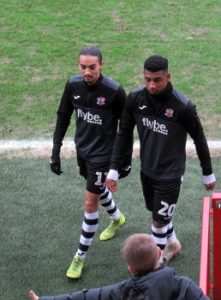 weekend and may be included after Jayden Richardson looked rather shaky in an unfamiliar left-sided role, but otherwise it’s likely to be as you were, with Nigel Atangana continuing to sit out after his red card at Forest Green. Two names definitely not on the team sheet will be Jordan Tillson, now plying his trade at the other end of Britain at Ross County, and Dino Visser, the goalkeeper released after his short term deal ended with Lewis Ward back to fitness.

Had this fixture taken place a couple of weeks ago it’s likely the bookmakers would have offered short odds on a City victory. However, the mood on the Lincolnshire coast has taken an upward slant with the appointment of jocular Bristolian Ian Holloway as manager. News that he was about to take over perhaps filtered through on New Year’s Day as Grimsby beat Salford 1-0 to record their first victory since a certain 3-1 away win in September, this was then followed up with another 1-0 win (despite playing most of the match with 10 men) at Mansfield and only a late penalty denied them yet another 1-0 at Leyton Orient last Saturday. Those results do, however, emphasise Grimsby’s greatest issue, as they have failed to score more than once in a match since a 3-2 reverse at Sunderland in the EFL Trophy at the beginning of October. It says it all that their top league scorer, Ethan Robson, has just three goals to his name. James McKeown in goal has shown City in previous meetings why the lack of goals hasn’t cost his side more points.

Grimsby have become something of a bogey side in recent encounters – that 3-1 victory alluded to previously came at the Park and remains City’s only home defeat of the season (in all competitions). Robson scored two of his three goals in this fixture, an Ogbu penalty in addition sealing victory with City’s consolation in injury time from Ryan Bowman. Last 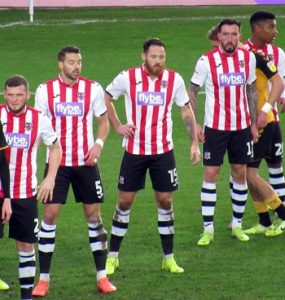 season’s trek to Blundell Park saw McKeown earn his spurs with a penalty save in an inspired display to hold a dominant City to a 0-0 draw. Grimsby have the slight edge in league head to heads with 13 wins to City’s 10, eight matches finishing level. The last 12 encounters can be found at https://www.grecians.co.uk/wordpress/?p=9832

Andy Haines has refereed ten Exeter games, going back to 2006. Those games can be found at https://www.grecians.co.uk/wordpress/?s=haines