City’s capitulation against Hartlepool means an extra fixture in an already congested month, something only added to by the EFL Trophy where, for the second season running, City have progressed to the knockout stages. Next up is a match against a side in great form having not lost a game (in 90 minutes) in any competition since early September. With the games coming thick and fast Matt Taylor is likely to name a mix of first team and fringe players – expect Dino Visser to 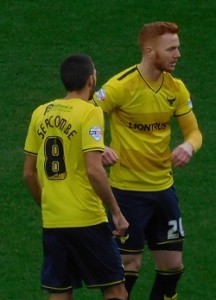 start in goal, the South African having featured in the last EFL Trophy match against West Ham U21s, while Gary Warren could have a run out as he continues his return from injury. Others hoping to feature include Jordan Tillson, Josh Key, Joel Randall and Will Dean.

After a poor start that saw them win just one of their first seven league fixtures, Karl Robinson’s Oxford side have become nigh-on unbeatable, rising from near the foot of the table to the promotion mix. Cup form has been strong too, the Us still competing in all three cup competitions with an EFL Cup Quarter Final against Man City to come in a fortnight. Like most managers Robinson has viewed the EFL Trophy as an opportunity to use his squad, and the standout player in the competition so far has been Rob Hall, with three goals in three games. One player unlikely to feature will be the veteran ex-City forward Jamie Mackie – a regular in the league side Mackie has unsurprisingly not been considered for this competition.

The sides have met twice before in this competition – the last being in the first season since the competition was redesigned as Oxford defeated a youthful City side (including a debut from the bench for Jordan Storey) 4-2. Prior to that City, then a non-league side visiting league opposition during the brief period when Conference sides entered the competition, emerged victorious on penalties after a 2-2 draw back in 04/05. The last 20 encounters between the two 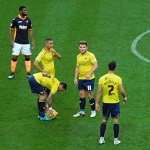 teams can be found at https://www.grecians.co.uk/wordpress/?p=10401

Kevin Johnson had refereed 12 Exeter games, those games can be found at  https://www.grecians.co.uk/wordpress/?s=%22kevin+johnson%22