The EFL Trophy is an opportunity for Matt Taylor to look at his squad options and blood a few youngsters, and this season is likely to be no different as City welcome Cheltenham to the Park. While there are rules around squad strength in the competition, expect these to be utilised to the max as Taylor will be set to rest most of his first XI, while those on the 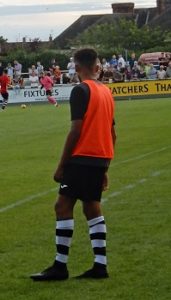 fringes can press their claim. There could be a first start for 15 year old Ben Chrisene, City’s youngest ever player having come off the bench in the Carabao Cup defeat at Coventry.

Cheltenham boss Michael Duff is likely also to ring the changes, his side having made a reasonable start to the season sitting in 11th with two each of wins, draws and defeats. One player who won’t be featuring is former Grecian Reuben Reid – the summer signing from Forest Green has yet to make his Robins debut after picking up an injury in pre-season.

Considering the relative closeness of the sides this will be the first time City and Cheltenham have faced off in this competition, all previous meetings having been in the league. Once City’s bogey side, the tables have been well and truly turned with City now unbeaten in the last nine meetings, meaning Cheltenham’s head-to-head lead has been cut to 9-7 (two draws). Head to head details at https://www.grecians.co.uk/wordpress/?p=9292

Darren Drysdale has refereed 8 Exeter games, including one game away to Cheltenham Town, details at https://www.grecians.co.uk/wordpress/?s=drysdale