Having scored late goals in their first two matches, City had it done to them by Swindon on Saturday in the 1-1 draw, a point which actually raised both sides up a place in the fledgling table ahead of a first midweek league trip of the season.

Matt Jay’s contribution from the bench will have given Matt Taylor food for thought in terms of whether to bring him in to the starting XI, while Tom Parkes sits out the final match of the suspension he picked up retrospectively against Swindon.

Another club seemingly feeling the effects of off-field turmoil, Oldham were considered as likely candidates to struggle, and perhaps it’s no surprise therefore that the Latics find themselves bottom and pointless after three matches following defeats to Forest Green, Crewe and Bradford. In the summer Oldham made something of a left-field appointment in Laurent Banide, and the Frenchman whose managerial experience has largely been in the Middle East has a tough task on his hands convincing the club’s fans that he is the right person for the job. Summer signings saw a number of French players come in, alongside the likes of veteran defender David Wheater and Scott Wilson, whose goals helped keep Macclesfield in the league last season.

City picked up all six points from this fixture last season. The corresponding match at Boundary Park saw Jayden Stockley grab the match ball in one of his final matches for the Grecians as City twice fell behind (Surridge and Lang) before Stockley notched his hat-trick to claim a 3-2 win. It was his replacement up front, Ryan Bowman, who gave City the three points with a solitary strike in April at the Park, which extended City’s unbeaten run against the Latics to seven 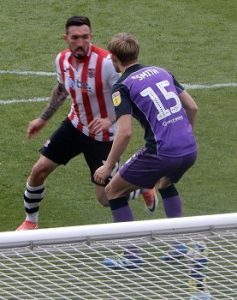 matches dating back to a 2-0 defeat in December 2009. City have the league head to head lead with 12 wins to Oldham’s eight, six matches finishing level. Details of the last 10 games can be found at https://www.grecians.co.uk/wordpress/?p=10043

Graham Salisbury has refereed 12 Exeter games going all the way back to 2001. Details of those games can be found at https://www.grecians.co.uk/wordpress/?s=graham+salisbury