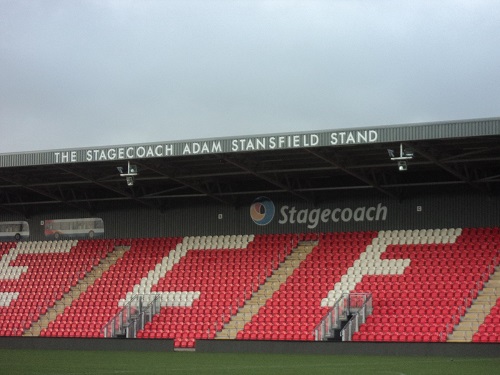 Exeter City have secured the services of defender Robbie Cundy on a season long loan from Bristol City.

The 22 year old was initially part of Aston Villa’s youth set-up but having been released by Villa Robbie joined Oxford United. He had loan spells in the Southern League with Daventry Town and Chesham United in 2015 and made his first team debut for the Oxford in November 2015. He then had further loan spells with Gloucester City, Oxford City and Southport. Having been released by Oxford in May 2017 Robbie joined Gloucester City permanently shortly afterwards and the following season the central-defender signed for Bath City in June 2018. In May this year he signed for Bristol City.

On his move and the prospect of developing his game further, Robbie said:

I’m delighted to be here, it’s a big club, and I played against them last year in pre-season and I liked the look of the team then and I’m ready to get going.

The gaffer used to be a centre half and he has a good reputation of getting young lads on loan and improving them to get them into the first team so it was definitely a factor and I hope I can do the same.

I had a good season last year and played every game and I think I’m ready for the step up now, hopefully I can do that, I’m excited.

Robbie has had his first training session with his new teammates and is targeting some hard work in pre-season as he hopes to force his way into contention. Robbie continued:-

The facilities are nice; the training ground is really nice, and the pitches are good. My first session today was good, and we did a bit of running at the end, which wasn’t fun, but it’s got to be done! Everyone was sharp in training and we did some small sided games. They (the team) looked good from last season and I could see that in training.

Pre-season is all about getting minutes in the tank, obviously running isn’t as realistic as playing games, which you want to be doing. We’ve got quite a few fixtures coming up so hopefully I can get some minutes.”

I do my basics, defend it, head it and kick it. When the time is right, I like to play out a bit and hopefully I can do that here.

Previous: Nicky Ajose is a Grecian
Next: Noah Smerdon is the new 1931 player