A single point from the Easter break means that although City are still two points clear of eighth place, the playoff destiny is out of their hands currently due to Newport having a game in hand. Matt Taylor will have been pleased with the response of the players to the debacle against Crawley in earning a deserved point at Stevenage, and may keep the side largely 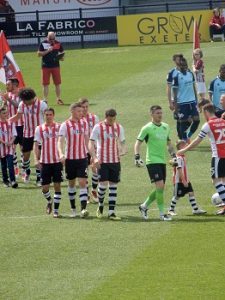 unchanged. Randell Williams in particular stood out and would consider himself unlucky to move aside, while Ryan Bowman now has four in four (plus a tight disallowed goal against Port Vale) as he is showing signs of being able to fill the void left by the departure of Jayden Stockley.

It has been a topsy turvy season for Oldham in their first season in the basement since 1971. Club legend Frankie Bunn was appointed in the summer but found himself out after a 6-0 hammering at Carlisle on Boxing Day. The next appointment was of a high profile supporter in Paul Scholes, but his first foray into management lasted barely a month before he walked out amidst rumours of boardroom interference in selections. For the second time this season Pete Wild has been placed in charge, and his second spell as caretaker has seen Oldham’s form improve to the extent that a win on Saturday would put the Latics on the fringe of the playoffs with a game in hand. Chris O’Grady is a seasoned campaigner at this level but Callum Lang heads the scoring charts with 15 in all competitions.

The reverse fixture at Boundary Park was a red letter day for Stockley. Oldham twice took the lead through Surridge and Lang, only for Stockley to walk away with the match ball after claiming a hat trick in a 3-2 win. That win extended City’s unbeaten run over Oldham to six matches – Oldham’s last visit to the Park in 2011 saw City win 2-0 through goals from Nardiello and Bauza. City have the edge in league head to heads with 11 wins to Oldham’s eight, six matches finishing level. Details of the last 9 games between these two sides can be found at http://www.grecians.co.uk/wordpress/?p=9999

Chris Sarginson is well known at the Park, and in total has refereed 20 Exeter games details at http://www.grecians.co.uk/wordpress/?s=sarginson