City’s promotion hopes suffered a setback on Saturday as Brett Huxtable lived up to his usual billing by ensuring a share of the spoils thanks to a crazy penalty decision. Not only that, but Christy Pym’s second yellow card beyond even the nine minutes of injury time allotted for the injury to Luke Varney means City go into Tuesday night’s key fixture at both ends 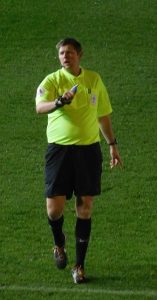 of the table a key player light. James Hamon is set to deputise for his third league start of the season, while Hiram Boateng may return to the starting XI having been benched at Cheltenham. Matt Taylor has a decision to make also about Troy Brown and whether he is up to another 90 minutes after his long layoff having played over 100 minutes on Saturday, as well as whether he continues with the wingback formation or goes back to a four man defence, which would allow the likes of Lee Holmes to start.

Macclesfield were expected to struggle having been surprise winners of the National League last season and having lost the mastermind of that success, John Askey, in the summer, and struggle they have. Askey’s replacement, the experienced Mark Yates, ensured the Silkmen were competitive but unable to register wins, and he paid the price in October. Having gone for the tried and tested, Macclesfield then turned to a high profile name in Sol Campbell. His appointment was confirmed in time for Macclesfield’s match at City, although caretaker Danny Whitaker was still at the helm for that shock 1-0 win. His influence, plus bringing in the likes of Andrew Cole to assist the forwards, has at least ensured Macclesfield go into Tuesday night’s match knowing a win will lift them off the bottom and out of the relegation zone. All the while the Silkmen are beset by off-field problems, with several months of delays to wages being paid, so to still be competitive against that backdrop is impressive. The main player to watch will be Scott Wilson, the ex-Bristol City striker reaching double figures in league fixtures with the goal in the surprise 1-1 draw at Lincoln just over a week ago.

The aforementioned 1-0 defeat will probably go down as one of the worst City performances of the season, and represented the Silkmen’s first win over City since 1999. Harry Smith scored the only goal that evening. City romped to victory on their last visit to Moss Rose. A double from Stansfield and goals from Harley and Gill, Yeo replying for Macclesfield, saw City win 4-1. Macclesfield’s win at the Park in November levelled up the league head to head with four wins each, although draws are out in front with five. Head to head details can be found at http://www.grecians.co.uk/wordpress/?p=9890