When you’re winning away to the leaders heading in to the sixth minute of four minutes added time only to concede an equaliser it can be devastating, so Matt Taylor will need to pick up his troops for another tough match on Saturday while also noting that this was not the first time this season that City have let a lead slip deep into injury time. Taylor went with a 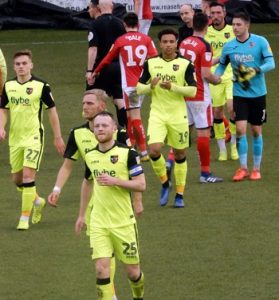 change of formation on Tuesday to utilise Kane Wilson’s attacking ability as a wing back, while Aaron Martin came in from the cold to replace Dean Moxey after his knock at Crewe. Elsewhere Hiram Boateng made his long-awaited return from his hip injury off the bench and will be gradually eased in, and Donovan Wilson was given his first start since making his loan move from Wolves. Taylor’s selection on Saturday will largely depend on which formation he chooses, plus whether any of his walking wounded such as Moxey, Nicky Law or Lee Martin are available.

Tranmere have made a decent fist of life after their return to the Football League, and are within touching distance of the playoffs. Micky Mellon, who made what was considered a surprising two division drop from Shrewsbury, has continued where he left off by guiding Rovers to promotion and the momentum has continued this season. For this Mellon and Tranmere must be grateful to a player once discarded by City – James Norwood has been in scintillating scoring form all season, vying with Jayden Stockley for the leading scorer title before Stockley’s departure for Preston, and he has now moved on to 22 league goals and 24 in all competitions. Tranmere have another former City player in their ranks, albeit in Mark Ellis someone who departed the club for Bolton for a 6-figure fee while still a youth player.

Tranmere faced City at a good time back in November when City were in the midst of a slight mid-season slump, and emerged comfortable 2-0 winners thanks to Norwood’s brace against his former employers before Moxey picked up his second red card of the season. The last time Tranmere made the long trip down to Exeter in January 2015 they left with what was a surprise 2-1 win to aid their relegation battle – goals from Myrie-Williams and Donnelly sandwiching an equaliser from Alex Nicholls. Tranmere have the lead in league head to heads with 18 wins to City’s 12, while just five matches have finished level.

Three Exeter games for John Busby, details can be found at http://www.grecians.co.uk/wordpress/?s=busby