It’s fair to say the defeat to Grimsby was a bizarre one – an offside goal where the linesman was (likely correctly) overruled, a red card, a team registering 30 shots without winning. City won’t come up against a keeper like James McKeown every 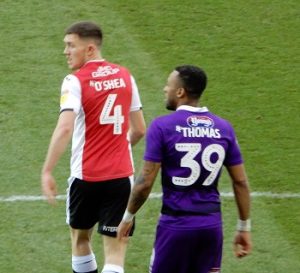 game, and played a lot worse against Yeovil while winning. Matt Taylor rang the changes on Saturday with Alex Hartridge making his EFL debut, but it’s likely Taylor will go back to a more tried and trusted line-up at Swindon – Aaron Martin too will be pushing for a recall after loanee Dara O’Shea was culpable for both Grimsby goals.

Expected to challenge, it has not been the case for Swindon who disposed of the colourful Phil Brown in favour of former Oldham boss Richie Wellens. The Robins go into the new year in 14th place having drawn all three of the festive fixtures so far, latterly a 0-0 draw at a Mansfield side managed by former boss David Flitcroft. Goalscoring has been an issue with just 27 goals registered in 25 games, and Swindon will look to the likes of Michael Doughty (seven goals in all competitions) and Elijah Adebayo (five). James Dunne was benched on Saturday but is likely to feature against his former club.

The reverse fixture in October saw City run out comfortable 2-0 winners through Forte and Stockley. The match at the County Ground last season saw City lead through McAlinden only for Woolery to equalise in a 1-1 draw. Swindon hold a comfortable league head to head lead with 36 wins to City’s 24 (25 draws). Details of the last 14 encounters can be found at http://www.grecians.co.uk/wordpress/?p=9146

Kinseley has refereed five Exeter games, details can be found at http://www.grecians.co.uk/wordpress/?s=kinseley