Jayden Stockley’s late winner in the derby against Yeovil on Boxing Day extended City’s winning run to three games ahead of a fixture against another in-form side. Matt Taylor named an unchanged side again, and may be tempted to do so albeit while being wary of fatigue given a run of four games in 11 days. Hiram Boateng once again missed out on a place on the bench against Yeovil, with speculation surrounding his likely return to the squad, while the likes of Chie Ogbene are pushing hard for a start after impressing from the bench.

Having recorded just one league victory up to the end of September, Grimsby have come into some decent form to pull away from the bottom, no mean feat for a squad acknowledged to be more sparsely resourced than many others in the division, and credit must go both to the manager Michael Jolley and the Grimsby board for backing him when other boards may have been more trigger-happy. The Mariners go into Saturday’s fixture also having won their last three after a 1-0 win at Port Vale on Boxing Day, indeed have won five and drawn one of their last seven in the league. Goals were an issue, but 18 goals in those seven fixtures, including five against Tranmere and four against Notts County, suggest this issue has been addressed. Wes Thomas appears to be the main beneficiary, he now has eight goals in all competitions, while City will be only too aware of the strength of Grimsby at the back through keeper James McKeown.

It was McKeown who stood between the sides at Blundell Park in October, capping a fine display with a penalty save 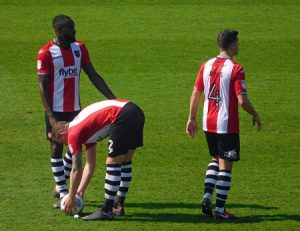 from Pierce Sweeney in a 0-0 draw. The match at the Park last season saw Stockley and McAlinden bag the goals in a 2-0 win. For Grimsby to continue their winning run they will have to do something they have not done against City in five matches since returning to the league, and that is to score. They do have, however, the slight edge in league head to heads with 11 wins to City’s 10 (eight draws). Details of the last 8 encounters can be found at http://www.grecians.co.uk/wordpress/?p=9832

The match officials will be

This will be Sarginson’s 21st time in charge of an Exeter game. Details of those 20 games can be found at http://www.grecians.co.uk/wordpress/?s=sarginson