Having finally registered a win against Crewe, City hit the M5 and M6 for a second visit to the Greater Manchester area in the space of a fortnight in buoyant mood. Matt Taylor sprung a couple of surprises with his selection last week, leaving Aaron Martin on the bench and recalling teenager Archie Collins, both will hope to feature at Oldham. Also close to a 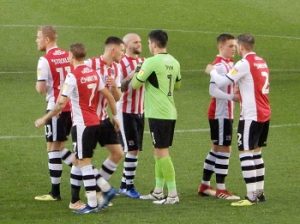 return is Hiram Boateng, although with the busy festive period coming up Taylor may wish to delay Boateng’s return or restrict him to the bench should he be declared fit.

Oldham, who’d spent about the last 73 years (or so it seemed) in the third tier, finally changed divisions in May, but not in the direction they’d have liked. With rumours (like their near neighbours Bury) of off-field issues, the pundits were unsure of where to place the Latics in their pre-season forecasts, more so when they turned to the untried (but club legend) Frankie Bunn. A solitary point and a League Cup defeat in their opening three fixtures didn’t bode well, but Bunn’s side has settled in to a rhythm now, with just one EFL Trophy defeat in their last nine matches in all competitions and, like City, Oldham will play at Premier League Fulham this season having drawn them in the FA Cup third round. Summer signings included Chris O’Grady and the re-signing of former Everton player Jose Baxter, but it has been Bournemouth loanee Sam Surridge (who impressed at Yeovil last season) leading the way with 10 goals in all competitions including seven in 12 in the league. O’Grady has six in all competition.

The last time the sides met was in City’s relegation season of 2011/12, and it was City who had the upper hand on that 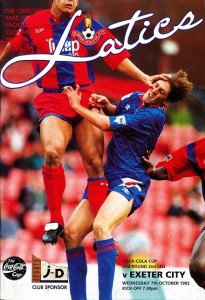 occasion, picking up four points and two clean sheets in what was otherwise a dismal season. The corresponding fixture will not live long in the memory as it finished 0-0 (unlike the previous season when City came back from 3-0 down with 13 minutes left to draw 3-3, plus missing a penalty). City recorded a 2-0 win at the Park thanks to goals from Nardiello and Bauza. City have the league head to head lead with 10 wins to Oldham’s eight, with six matches finishing level.

Just the two games by Martin Coy in charge of an Exeter game. Details at http://www.grecians.co.uk/wordpress/?s=martin+coy