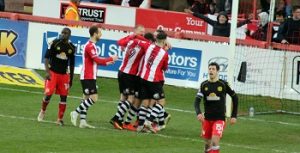 Defeat at Bury means City have now gone two months since their last league victory, a barren run Matt Taylor will be determined to end on Saturday with what looks on paper at least to be a very winnable tie. The 2-0 reverse in the north west saw City finally drop out of the playoff places for the first time this season, and Taylor will continue to look for the winning formula. Word is that Hiram Boateng is very close to a return, but Saturday could be too early for a recall that would definitely add to City’s attacking nous at a time when the goals have largely dried up. Otherwise it’s pretty much as you were.

Crewe have seemingly settled in to life as a lower end of League Two club under David Artell, and a position of 17th is probably where the majority of pundits would expect the Railwaymen to be. Artell went for experience in the summer, signing former Grecian Alex Nicholls, whose late season form last term wasn’t enough to keep Barnet in the league. 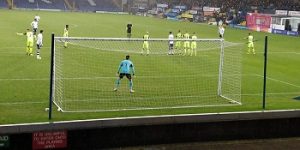 A stunning 6-0 win over Morecambe on the opening day proved a bit of a false dawn, and Crewe are also going into Saturday’s match in a poor run of form with two victories and six defeats in their last eight matches in all competitions. Firepower has been supplied mainly by Jordan Bowery and Charlie Kirk, each scoring five league goals so far, while others to look out for include Ryan Wintle.

City will be hoping for a repeat of last season’s encounter at the Park, where goals from Tillson, Taylor and Stockley saw the hosts cruise to a 3-0 win. There was drama aplenty in the return at Gresty Road, as Crewe thought they’d snatched the points when Miller put them ahead in the 88th minute, only for Stockley and Moore-Taylor to score in injury time to give City an unlikely 2-1 win. Those wins mean City have the league head to head lead with 18 wins to Crewe’s 16, 12 matches finishing level.

Mr Hicks has refereed three Exeter games, details of those games can be found at http://www.grecians.co.uk/wordpress/?s=hicks