Following City’s defeat to Peterborough in the EFL Trophy on Tuesday night, Matt Taylor’s side can now “concentrate on the league” with a view to ending the club’s recent dismal league form that has seen City remarkably still stay in the promotion picture, albeit with what looks a very tough trip to the North West on the cards. Aside from the long-term absentees Troy Brown and Hiram Boateng, Taylor has pretty much a full squad to choose from with Aaron Martin back from suspension to resume his place at the back. Otherwise further changes could be made elsewhere as Taylor tries to recapture the winning formula of earlier in the season.

Having been relegated and with rumours of financial pressures off the pitch, the pundits didn’t really know what to make of Bury’s chances this season, some predicting the Shakers to bounce straight back while others looking at them as potentially following Chesterfield straight through the division. If there are financial issues, the size and make-up of Bury’s squad doesn’t show it, with players of pedigree at the club such as Jermaine Beckford, Chris Dagnall, Neil Danns and Nicky Maynard to choose from, while Nicky Adams, one of the class acts at this level in recent years with Carlisle, was also snapped up in the summer. As a result, Bury are currently riding high just above City in 5th place in the table and hitting free-scoring form where they recently scored 22 goals in six matches. While Beckford has been restricted to a single sub appearance this season, Maynard is in fine form with eight goals in just ten starts in the league, but goals have been shared around with no fewer than 13 players having registered in the league this season.

Although Bury would end up promoted in 2014/15, City had the upper hand in fixtures between the sides, picking up four points from this fixture. The corresponding fixture at Gigg Lane finished 1-1, Arron Davies’ strike being cancelled out by former Grecian Dan Nardiello. City won the home tie 2-1, goals from Grimes and Keohane sandwiching an equaliser from Soares. Bury have a comfortable league head to head lead with 15 wins to City’s eight, nine matches 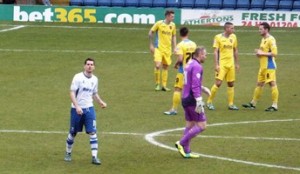 finishing level. Details of the last 17 encounters can be found at http://www.grecians.co.uk/wordpress/?p=9905

Match officials for the game will be

Ross Joyce has refereed three Exeter games, details of those games can be found at http://www.grecians.co.uk/wordpress/?s=joyce