A point away to a high-flying side with a superb home record will definitely be counted as one in the credit column even if it extended City’s winless league run, and Matt Taylor will be hoping that the draw at Colchester will prove a spur as he prepares his side to face the league’s basement club. Taylor will have some shuffling of his pack to do as he is without his

namesake skipper Jake, plus Aaron Martin, who both picked up their fifth booking of the season on Saturday so will sit out Tuesday’s match suspended. This means it will be likely that Luke Croll will return to the starting XI alongside loanee Dara O’Shea, while Lee Martin is the likely candidate to take Taylor’s place, although Archie Collins could also be in the frame.

It’s fair to say it has not been the easiest of times for Macclesfield since they regained their league place by winning the National League last season. Manager John Askey departed for Shrewsbury (but has already got the chop!), and his replacement, the experienced Mark Yates, was unable to mould his squad into one that would be competitive and paid the price. At time of writing (Monday morning) Danny Whitaker is still the caretaker boss, with an announcement expected at some point 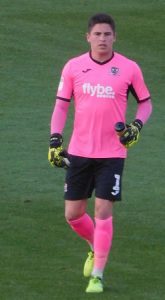 about a new manager – speculation mounted that Sol Campbell’s name was in the frame. Whoever is in charge on Tuesday night will have been boosted by the Silkmen’s 1-0 victory over Yeovil on Saturday, just their second league win of the season. It says a lot for Macclesfield’s fortunes that their top scorer is defender Michael Rose, while fellow defender Jamie Grimes will be hoping for better luck than his last appearance against City when he was red carded while playing for Cheltenham.

Tuesday marks the first meeting of the sides since City’s glorious 08/09 promotion campaign, where they dealt out two thrashings to Macclesfield. The corresponding fixture saw City win 4-0 through Stansfield, Logan, Saunders and McAllister, following up an earlier 4-1 win at Moss Rose where Stansfield (2), Harley and Gill scored, Yeo pulling one back for the hosts. Those wins put City just ahead in the league head to heads with four wins to Macclesfield’s three, although five matches have finished level. Details of the encounters between the two sides can be found at http://www.grecians.co.uk/wordpress/?p=9890

Brett Huxtable has refereed eight Exeter games, details can be found at http://www.grecians.co.uk/wordpress/?s=brett+huxtable

Previous: Next Up: Colchester United vs Exeter City
Next: Next Up: Exeter City vs Peterborough United (EFL Trophy)