Last Saturday’s 2-0 win over Swindon continued City’s fine run of form to nine unbeaten in all competitions, and Matt Taylor will be hoping to make it into double figures with a positive result from one of the longest trips of the season, the first of two away matches in four days. Taylor’s preference has tended to be to play one up top away from home, which 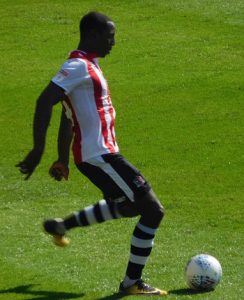 could mean a recall for Lee Martin ahead of Jonathan Forte, although Forte’s form in front of goal has made this consideration all the more difficult. Jordan Tillson too has often been preferred to Lee Holmes on City’s travels. Elsewhere Brentford loanee Chiedozie Ogbene pulled up immediately after coming on against Swindon, so Taylor will be sweating on his fitness.

Grimsby were not expected to pull up any trees in League Two this season, and early indications are that these predictions aren’t far wide of the mark, although the Mariners did win their last two league matches prior to a week off on account of their match with Mansfield last week being postponed due to Mansfield’s apparent array of international stars. Manager Michael Jolley was said to be relieved about this enforced week off as he has had a number of injury problems to contend with. Goal scoring has been an issue, indeed their total number of league goals so far this season is nine, a tally matched by Jayden Stockley alone. Only one player – Jordan Cook – has found the net twice. Perhaps the biggest surprise in terms of personnel is that Preston loanee Ben Pringle, who shone at this level with Rotherham where he tormented City on more than one occasion, has been restricted to a handful of substitute appearances, while Grimsby can also call upon veteran ex-Liverpool player John Welsh.

City have very much had the better of things since Grimsby returned to the EFL in 2016, winning three and drawing one

of the four matches so far, with Grimsby yet to even find the net. Last season City claimed all six points – the corresponding fixture last season saw City win a dull encounter 1-0 through a Stockley penalty before WBA loanee Kane Wilson picked up his second red card of the season late on. Back on November goals from Stockley and McAlinden sealed the points. Those wins have meant City have closed the gap in league head to heads, with Grimsby up 11-10, seven matches finishing level. Details of the last seven encounters can be found at http://www.grecians.co.uk/wordpress/?p=9832

This is Matt Donohue’s first season as a Football League referee, so this will be his first time he’s taken charge of a game involving Exeter City.