A third successive defeat, this time a heavy home reverse against promotion favourites Lincoln, has perhaps hit home the enormity of the task facing Matt Taylor in his first managerial role, but there is little respite in a busy fixture period with the perhaps unwanted distraction of the first EFL Trophy group match of the season at Yeovil. Taylor will no 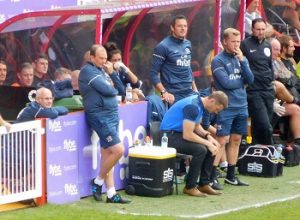 doubt use this fixture as an opportunity to blood some of his youngsters and give his fringe players an opportunity, so the likes of O’Shea, Oates, Sparkes and Collins may expect to start, while James Hamon is likely to deputise for Christy Pym in goal. New loan signing Chiedozie Ogbene will also likely be given a start.

Yeovil have been arguably the surprise package in League Two so far, with Darren Way’s side expected to struggle but, after a 1-0 win at Grimsby at the weekend, the Glovers are currently 5th in the table. Way will, however, be likely to make a number of changes to his side as he looks to preserve Yeovil’s excellent start to the league campaign.

The sides met in this competition last season too – Surridge, Browne and Khan putting Yeovil 3-0 up before Jack Sparkes pulled one back late on. That game can be found at http://www.grecians.co.uk/wordpress/?sp_event=exeter-city-vs-yeovil-town-3

Kettle has refereed 10 Exeter games, details of those games can be found at http://www.grecians.co.uk/wordpress/?s=kettle

Previous: Former Limerick Player Joins Exeter on Loan
Next: Next Up: Exeter City vs Notts County