Exeter City have announced that midfielder Ryan Harley has been allowed to leave the Club and he’s joined Paul Tisdale at MK Dons. 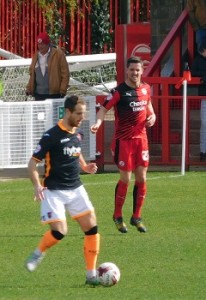 Ryan has had two spells with Exeter. He joined in 2007 and made his debut away to Crawley in January 2008 in a 2-2 draw. He became the creative midfielder for the Grecians, using his skills to set up goals, or scoring great goals himself. He signed for Swansea City on a free transfer in January 2011 and immediately loaned back. He was deemed surplus to requirements after Swansea were promoted to the Premiership and joined Brighton. While at Brighton he was loaned to MK Dons where he played 8 league games and failing to score in the league.

In 2014 he rejoined Exeter City ion loan, which was made permanent in January 2015. His second spell with Exeter was blighted by injury and he never quite regained the excellence he showed in first spell. The 33-year-old did however, in his last game at St James Park score a spectacular goal that helped Exeter to a win over Lincoln in a play off semi-final helping Exeter to another Wembley final:-

In all, Ryan Harley played 262 times for Exeter, scoring 50 goals.

This is a very good signing for the Club. Ryan is someone I know very well and he will certainly help me and the team through this rebuilding process with his experience and know how but also with his undoubted ability

Harley said of his move to MK:- 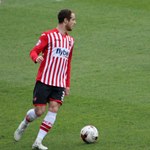 This is obviously a big football club and I’m really looking forward to getting started.

I’ve known the management team for a long time. I’m looking forward to playing for them again and linking up with a few of my friends.

Hopefully it’ll be a successful year. It’s a tough division, as I’ve experienced over the past few years, but hopefully it’s one we’ll get through.

Having been delighted to have secured the experienced midfielder Nicky Law, the decision was made to allow Ryan to leave, a decision we consider was made in the club’s best interest and was an amicable agreement between all parties.

Previous: Forest Green Rovers Take on Lloyd James
Next: Next Up: Exeter vs Carlisle