Nicky Law is Matt Taylor’s third signing of the close season. The 30-year-old is a midfielder who had been released by Bradford City at the end of last season.

The 30-year-old began his career with Sheffield United and spent time on loan with the likes of Yeovil Town and Bradford. He then went on to amass well over 50 appearances for Rotherham United before moving to Scotland to join Motherwell. A couple of years there then saw him make the move to Ibrox as he joined Scottish giants, Rangers, where he won the 2015/16 Scottish Championship. 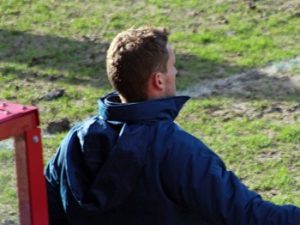 He is a good player, a League One player, it’s as simple as that. I’m delighted to have secured him as a signing, he’s going to be a very good player for us going forward.

He has signed a long-term contract, so I see him playing a big part in terms of our progression as a club over the next couple of years.”

Nicky has vast experience and he hasn’t missed many games through injury. He’s someone I can rely on, a good character, and I can trust him. But more importantly he is a good player.

I’d like to think his best years are ahead of him. The way we are going to train here we will give him a real impetus in terms of his game going forward. He has made a big commitment with his family. He is moving down with his partner and child so I’m delighted that he has invested in the club and the area.

Nicky Law talked of his move to Exeter saying:-

I’m delighted to get it sorted. I came down last week and spoke to Matt and I was really impressed with the facilities here and the direction that the manager wants to take the club.

The club has gone close over the last two years but the aim this year will be to go one better. I went with my gut and it was telling me to come to Exeter.

Hopefully, my experience will benefit the team, it’s something the manager spoke to me about. I had some good experiences at some big football clubs, a lot of highs and a lot of lows, which come together to give you that experience. Any help that I can give to the other lads here then I will be more than happy to give it.

I’m quite versatile. My preferred position would be central midfield, but I’ve played quite a lot of my career off the left. I’m certainly not an out and out winger but I can play left and come inside or play in the number 10 role. I like to get on the ball and try and make things happen.”

I’m based in Sheffield at the moment, so it is quite a big move. I know Jonathan Forte as we were in the same youth team at Sheffield United. I was born in Plymouth from when my dad played for Plymouth, although we left when I was young.

It’s not something that’s bothered me before, I’ve moved to Scotland before and on Thursday we had a good drive around and I like the area.

There is a video of Nicky Law in action:-