The Easter Monday victory over Cheltenham has set things up nicely going into the final month or so of the season, and Paul Tisdale will be hoping to build some momentum with a trip to a side that has perhaps underperformed this season. The ongoing injury crisis at the back has allowed Jordan Storey a route into the starting XI, a chance he has taken with 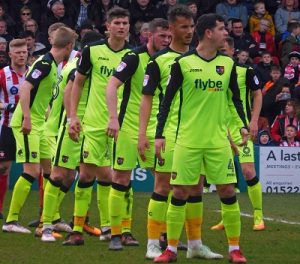 aplomb, notching the winner on Monday. At the other end of the pitch it was a red letter day also for Robbie Simpson, who celebrated his first start since picking up that injury against Blackpool by scoring and earning the MOM award. Another notable returnee, even if he didn’t make it off the bench, was Ryan Brunt, who will hope to play some part in the run in.

Cambridge began the season with high hopes under Shaun Derry, but an indifferent season saw Derry receive his marching orders, with former assistant Joe Dunne, the former Colchester manager, stepping into his shoes on an interim basis. He has steadied the ship somewhat, winning his first three matches although their 3-1 win over Crawley on Good Friday was their first win since, albeit in amongst a very tough run of games. Players to look out for include veteran Jabo Ibehre and the battering ram Uche Ikpeazu, who leads the scoring charts with 14 in all competitions. Barry Corr was re-signed by the Us but the former City striker hasn’t featured since going off injured against Grimsby in February. The reverse fixture kicked off the season, with Reuben Reid’s early goal settling matters. The corresponding fixture last season was on Easter Monday and saw Cambridge complete a league double over City with a 1-0 win through Leon Legge. Cambridge hold the league head to head upper hand, with 23 wins to City’s 17 (11 draws).

Details of the encounters  between Exeter and Cambridge Utd going back to 1986 can be found at http://www.grecians.co.uk/wordpress/?p=9355

He refereed just the one Exeter game, the 1-0 defeat away to Chesterfield, where he sent off Wiseman of Chesterfield for a second bookable offence.