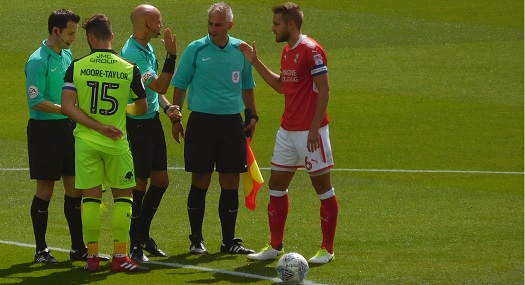 City’s win at relegation threatened Port Vale on Tuesday night may not have been pretty, but as we get to the business end of the season it’s points that are worth more than performances, and that win will have done wonders for the side’s confidence heading into a proper 6-pointer on Saturday. One selection headache came in the form of the performance, including his first senior goal, of Jordan Storey, who will hope to retain his place amidst strong competition, especially if

Troy Brown is considered fit to return. There remain issues in attack, however, with defenders having contributed each of the last three goals scored by City over the past few weeks, although Liam McAlinden put in an encouraging display alongside Jayden Stockley on Tuesday.

The managerial merry-go-round was in full operation recently when Steve Evans quit Mansfield to take up the manager’s role at Peterborough, which in turn led the Stags to poach David Flitcroft from Swindon. Phil Brown, recently dumped by Southend, has been appointed at the County Ground and he celebrated his first win in charge at the Robins last week, 3-1 at Cambridge, to keep Swindon in the playoff hunt as they look to bounce back immediately from their relegation last season. Key to their success will be Marc Richards, a striker with huge pedigree at this level. Signed in January from Northampton where he had managed just one goal all season, Richards immediately hit form and has scored nine goals in just 11 appearances, while his strike partner Luke Norris has 13 in all competitions. One familiar face to City supporters will be James Dunne, signed in the summer from Cambridge.

The reverse fixture back in August finished 1-1 – City went ahead through McAlinden before Kaiyne (yes, that apparently the correct spelling!) Woolery equalised. The last league encounter at the Park was back in 2011 when a Ryan Harley penalty secured the points against a Swindon side that would end up relegated. Swindon have a healthy lead in league head to heads with 36 wins to City’s 22, 25 matches finishing level.

Head to head details for the last 12 games between these two sides can be found at http://www.grecians.co.uk/wordpress/?p=9146

Lee has refereed 5 games involving Exeter City, the most recent being the 3-1 defeat away to Crawley earlier this season. Full details of all his Exeter games can be found at http://www.grecians.co.uk/wordpress/?s=lee+collins