With the weather last Saturday more conducive to snowball fights than Football, City were given the weekend off although it now means the fixtures will be coming thick and fast in the remaining eight weeks or so of the season. The enforced break was good news for City’s walking wounded, and a midweek friendly at Kidderminster was an opportunity for the likes of Pierce Sweeney and Luke Croll to get some minutes under their belts. The former in particular is welcome news given Kane Wilson is suspended for the next two matches, and assuming Sweeney is given the all-clear he’s likely to return

to the side – otherwise Lloyd James would be set to cover in the right back slot. Elsewhere Ryan Brunt could be poised to return at least to the bench after missing most of the season.

Carlisle’s match with Grimsby last week was one of the few fixtures in the entire Football League to survive the cold snap, and their 2-0 victory has put Keith Curle’s side in with a shout of the playoffs, albeit having played between one and three games more than most of their rivals. The Cumbrians, having struggled to recapture last season’s playoff form for most of the season, leading to speculation around Curle’s future, are coming into form at an opportune time and make the long trek down to Devon having won four straight matches, albeit all against sides struggling at the bottom. Their top scorer across all competitions, Hallam Hope, has scored in back to back fixtures and will need to be watched, while Jamie Devitt is the top league scorer with nine. Alongside Hope, their other goalscorer against Grimsby was one-time 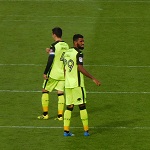 City youth product Mark Ellis, while Jamal Campbell-Ryce, who impressed in both fixtures against City while at Barnet, is likely only to be seen off the bench.

The reverse fixture saw City overcome the injury to Croll (from which he has just recovered) to win 1-0 thanks to a close range effort from Sweeney. Last season, however, this fixture was the one to watch if you wanted goals, excitement and late drama – the league fixture on the final day saw Carlisle snatch a 3-2 win to set up a playoff semi featuring the same two sides. City led through Reuben Reid, only for Danny Grainger to equalise from the spot. Skipper Jordan Moore-Taylor restored the advantage on the stroke of half time, only for another spot kick from Grainger and a Jamie Proctor effort to seal the points. City, however, hold the slight edge in league head to heads with 23 wins to Carlisle’s 19 (15 draws).

The full list of games played against Carlisle United while Paul Tisdale has been the boss can be found at http://www.grecians.co.uk/wordpress/?sp_calendar=9029

John Busby has refereed just the one Exeter game, which was last season’s FA Cup tie between Exeter and Luton. A game Exeter lost 3-1, but the referee harshly sent off one of the Luton players (Ruddock).