There’s something oddly euphoric about scoring twice in injury time to clinch a win (especially if you go 1-0 down after 88 minutes), and the mood in the City camp will no doubt be buoyant following that late triumph at struggling Crewe on Tuesday night. The one blow came prior to kick off with Jake Taylor limping out of the warm-up, forcing Paul Tisdale to 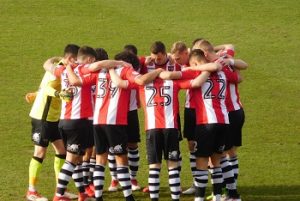 further shuffle his pack, and if Taylor doesn’t recover in time Tisdale may go again with Kyle Edwards, unless he’s tempted to bring in Dean Moxey to play on the wing. The other change may see Troy Brown return for his namesake Archibald-Henville, Tisdale clearly thinking Brown may not manage three full games in seven days following his lengthy lay off.

Grimsby go into Saturday’s match knowing they need to turn around their form otherwise they’ll start to be seriously looking over their shoulders at the relegation fight. A poor run which has seen the Mariners fail to win since early December, saw Russell Slade’s second spell in charge come to an abrupt halt after their 3-0 trouncing by Crawley. Caretaker Paul Wilkinson’s opening match in charge also ended in defeat at Cambridge. The problems are at both ends – Grimsby are joint lowest scorers in the division with 30, while they haven’t kept a clean sheet since holding Notts County to a 0-0 draw in mid-December. It was hoped that the

signing of Jamille Matt might give them the eye for goal they’ve been missing since Omar Bogle left, but his paltry return of three goals speaks volumes. Simeon Jackson was brought in on loan from Walsall on deadline day and he scored on his debut, so the striker who was prolific in spells with Rushden and Gillingham will need to be watched closely.

The reverse fixture in November saw City run out comfortable winners 2-0 thanks to goals in each half from Stockley and McAlinden. The scoreline was more emphatic at Blundell Park last season as Reid, Wheeler and a stunning solo effort from Watkins ensured a 3-0 win (details). Grimsby have the slight edge in league head-to-heads with 11 wins to City’s nine (seven draws), although it’s worth noting City have yet to concede a goal in this fixture since Grimsby’s very welcome return to the EFL last season.

Andy Haines has refereed Exeter seven times, including the Oxford Utd Ply Off semi-final in 2007. Details of the seven games can be found at http://www.grecians.co.uk/wordpress/?s=andy+haines