A rare Saturday off will have given Paul Tisdale’s squad a chance to rest their weary bones ahead of a busy February, as well as an extra few days to allow those close to a return to fitness to get themselves back into contention. Among those are the

regular centre back pairing of Jordan Moore-Taylor and Troy Brown, while recent loan signing Ryan Loft will likely have to make do with a spot on the bench. Kyle Edwards has finally extended his loan spell too, and will also probably be on the bench on Wednesday night.

Since the Boxing Day abandonment, Forest Green’s wealthy chairman has broken out his cheque book in an attempt to keep the club in the Football League, the most eye-catching signing Mark Cooper has made being that of Reuben Reid. Reid will be itching to line up alongside Christian Doidge against his most recent former employers and, after some comments made to the local media, may be in for a hostile reception from the Big Bank. Reid made an instant impact in scoring the only goal on his debut against Port Vale, but hasn’t scored in three matches since, although his presence no doubt helped in their 5-2 win over Cambridge. On Saturday they made the long trip to Carlisle and returned empty-handed with a 1-0 defeat to keep the club on the hill in the relegation zone. Doidge is the other obvious danger, his 19 goals in all 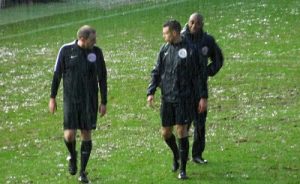 competitions have led to speculation he may end the month at a higher level, although with money to burn it may be that Forest Green are able to hold onto him until the summer at least.

People may be forgiven for going into this fixture somewhat fatigued, given it’s the fifth time the sides will have lined up against each other this season. So far City have won two and drawn one, with the other encounter abandoned at half time on Boxing Day due to the torrential rain causing the pitch to be waterlogged. The last time Forest Green visited the Park for a league fixture was in the 07/08 Conference season, a match that finished 3-3. City were 2-0 up by half time thanks to Logan and Mackie. Future City loanee Stuart Fleetwood and Lee Dodgson brought it back to 2-2, Logan scored his second before a last minute equaliser from Fleetwood. The league head to head sees City with five wins, Forest Green with one and five draws, while Rovers have yet to win a match at the Park in all competitions.

Huxtable had refereed five Exeter games, details can be found at http://www.grecians.co.uk/wordpress/?s=huxtable