To the disappointment of Exeter City fans, former Plymouth Argyle striker Reuben Reid leaves Exeter City for League 2 rivals Forest Green Rovers. There has been a fee, but this hasn’t been released by the Clubs. Reuben has signed a two and a half year deal with FGR.

Reuben Reid joined the Grecians in September 2016, and went on to feature 67 times (starting 56 games) and scoring  22 goals. He had a barnstorming start to this season, scoring eight goals but was out of favour by manager Paul Tisdale and replaced by Jayden Stockley. 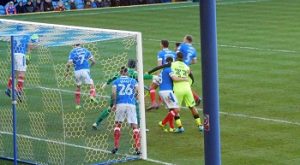 I’m relieved. It ran a lot smoother that I thought it would and things happen in football very quickly and I’ve come down today and managed to get it over the line.

I’ve had a bit of interest from Forest Green in a few different windows, sometimes stronger than other times, but the potential of the club and the long-term future of the club excite me.

From a selfish point of view, I think it’s an environment I can thrive in.

There’s a lot of points to play for and I am joining here with the belief that relegation is not an option.

With the help of others, fortunes will improve and we’ll pick up enough points to kick on and finish in a solid position.