While the game may not have ended as quietly as perhaps it should have done, last week’s 2-1 win over Stevenage propelled City back into the top three and maintained a stunning return to home form for Paul Tisdale’s side in 2017. City’s away form, however, has dipped alarmingly and Tisdale will hope the final game before Christmas, the shortest trip of the season, will provide some respite. With four 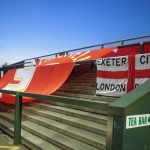 games in nine days lying in wait, Tisdale will need to keep his players sharp which may mean some rotation over the coming games, and thankfully the injury list appears to be shortening with Lee Holmes named on the bench for the Stevenage victory. Jordan Tillson is also available again after suspension, while Ryan Brunt is another who is thought to be close to a return. Tisdale may opt, however, to keep faith with the same starting eleven from last week although Dan Seaborne and Troy Archibald-Henville in particular are likely to be competing for a start.

As starts to the season go, Yeovil’s could hardly have been worse, travelling to hot favourites Luton and being demolished 8-2. The only way was up from there, but things haven’t been easy for a side tipped to struggle, and Yeovil go into Saturday’s match one point and two places above the relegation zone. They did manage to impress in beating Accrington and Coventry and cup form has been very good (still in both the EFL Trophy and the FA Cup) but Darren Way’s side is without a win in the league since late October, although a 0-0 draw away to fancied Mansfield was a decent result. While City supporters’ eyes will be on former City custodian Artur Krysiak, the only ever-present player in the Glovers’ squad, the main goal threat is likely to come from the trio of Otis Khan (nine goals in all competitions), Francois Zoko (eight) and Olefula Olomola (seven). 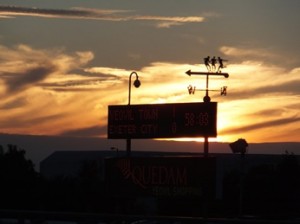 The sides have met already this season but it was in the EFL Trophy so doesn’t really count – Yeovil came out on top in that match 3-1, going into a 3-0 lead through Surridge, Browne and Khan before teenager Jack Sparkes pulled one back with his first goal for City. Last season the spoils were shared – the corresponding fixture on Boxing Day finished 0-0 in a match memorable only for a whistle in the crowd causing confusion on the stroke of half time (match detail). The return was altogether more dramatic – Yeovil raced into a 3-0 lead through second half goals from Zoko, Harrison and Lacey, and that was how it was when the fourth official was getting ready to show how much injury time was to be played, only for Wheeler, Brown and Reid to rescue a point (match detail). City hold a slight league head to head lead with three wins to Yeovil’s two, but you might be best off betting on a draw as five matches have finished level.

Match officials will be:- 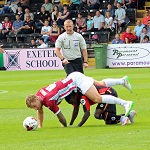 Lee has refereed six competitive Exeter City fixtures. Details of those games can be found at http://www.grecians.co.uk/wordpress/?s=swabey

Previous: Next Up: Exeter City vs Stevenage
Next: Paul Jones Returns on Loan