City finally overcame Forest Green on Tuesday night to book a third round “glamour” tie against Premier League West Brom, but at something of a cost – the 120 minutes of play will have taken its toll and there may be some tired legs ahead of a return to league action on Saturday. Jordan Tillson’s first start since his recent injury bought him another week off after his red card, meaning Hiram Boateng is 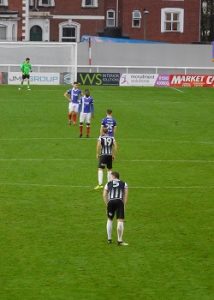 likely to regain his starting place. Ryan Harley is another player in contention to return having also emerged from the bench on Tuesday. The third sub from the Forest Green win was Kyle Edwards, whose effervescent display is likely to have given Paul Tisdale another selection headache, while Dan Seaborne’s first start since last season may have taken too much out of him to be risked on Saturday.

Stevenage have endured something of an up and down season and go into Saturday’s match in 16th place in the League Two table. While cup form has been good – a 5-2 thrashing of Swindon booked an FA Cup 3rd round tie against Reading – Darren Sarll’s side hasn’t tasted victory in the league since a 3-2 victory over high-flying Accrington in mid-October, which came just three days after they fell foul of the Luton whirlwind in going down 7-1. The main goal thread comes from joint top scorers Matt Godden and Dan Newton, who have nine goals each in all competitions. Other players of pedigree include Chris Whelpdale, who is likely to pull the strings from midfield.

Last season saw City take four points from this fixture. Early in the season up in Hertfordshire City survived a red card for skipper Jordan Moore-Taylor to win 2-0 through second half goals in quick succession from Lee Holmes and Ollie Watkins. The return at the Park saw in-form City drop two points in a 1-1 draw – Jobi McAnuff gave the visitors a first half lead before Reuben Reid’s equaliser in the second. City hold the league head-to-head edge with six wins to Stevenage’s four, although this may be one for your pools coupon as eight matches have finished level.

Previous: Next Up: Exeter vs Forest Green – FA Cup Replay
Next: Next Up: Yeovil Town vs Exeter City