Paul Tisdale kept his powder dry on Tuesday night, naming an extremely youthful squad for the EFL Trophy defeat to Chelsea’s youngsters, although the presence of Ryan Harley in the starting line-up will have been very welcome ahead of City’s FA Cup 2nd round trip on Saturday. It may be too soon for Harley to return fully, but he may be considered for the bench. A further clue to Saturday’s starting eleven may have 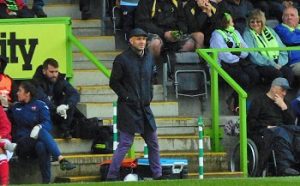 been in the likes of Craig Woodman and Reuben Reid playing a full part on Tuesday night, which may mean they are on the bench on Saturday. Otherwise the big concern is Troy Brown, who limped out of last Saturday’s stunning win over Accrington. Tisdale wasn’t sure of the extent of Brown’s injury, whether it would be days or weeks, but his fellow Troy, Archibald-Henville, performed well after coming on and may, as Tisdale’s considered natural replacement for Brown, start. Otherwise Pierce Sweeney may partner Jordan Moore-Taylor should Tisdale revert to a back four, with Kane Wilson likely to start at right back.

League newcomers Forest Green encountered a dismal start to life as part of the 92, but Mark Cooper’s side has recovered well of late with a five match unbeaten league run propelling them out of the bottom two, although they lost at Chesterfield and drew with Cheltenham in their last two matches. The key to stopping Forest Green appears to be in stopping Christian Doidge – the former Dagenham & Redbridge striker has contributed exactly half of their goals in the “big three” competitions with 12 out of the 24 goals they have scored. Star 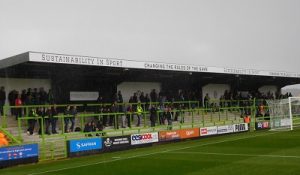 midfielder Liam Noble, who was subject of a bitter transfer battle with his former club Notts County in the summer, took matters into his own hands by quitting the club and will resume his career at Notts County in the new year. Other players to look out for include Keanu Marsh-Brown and Omar Bugiel – the latter mainly from the bench.

City have already made the trip up the hill once this season, winning comfortably 3-1 as their hosts struggled to acclimatise to the rarefied atmosphere of the fourth tier. Sweeney gave City an early lead before Reid’s double sealed the points, Forest Green’s consolation coming from sub Shamir Mullings just four minutes after entering the fray. This season marks the second time the sides have been paired in the FA Cup – in the infamous 02/03 season the BBC TV cameras were on hand to watch City’s trip to the “old” Lawn but if you are suffering from insomnia, bung the video of that 0-0 draw on. City won the replay 2-1, coming from behind after former (and future!) Grecian Jon Richardson put Forest Green ahead, Gareth Sheldon and Matthew Lock, with his only goal for City,

The match officials for this are:-

Gavin Ward is a familiar official for Exeter fans, and despite his reputation we’ve not done too bad with him charge. Check out his stats with Exeter at http://www.grecians.co.uk/wordpress/?s=gavin+ward