The back to back away trips to Chesterfield and Crawley were ones that City and Paul Tisdale would have hoped to gain six points from given the struggles of both clubs, but the shock 1-0 defeat in Derbyshire on Saturday brings added urgency to the fixture against the latter on Tuesday night, especially given City’s patchy form in recent weeks and a 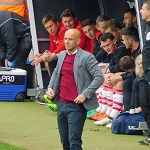 massive fixture on Saturday. City’s last two midweek league fixtures have seen Tisdale’s side lose both, conceding seven and scoring just one, so perhaps solace will instead be sought from the last midweek away league fixture where City won 2-1 at Barnet back in August. Tisdale may look to freshen things up slightly given a congested fixture list in the next couple of weeks although he remains hampered by a long injury list.

The summer saw Crawley replace their relatively unknown manager with an altogether more high profile name trying to make his way in management in ex-Leeds forward Harry Kewell. It was considered a gamble given his lack of lower league experience and an unsuccessful spell in charge of Watford’s U23 team, but Crawley were hoping he’d be less Teddy Sheringham and more Jimmy Floyd Hasselbaink. Early indications show the former could be the stronger barometer as Crawley have struggled so far and go into Tuesday night’s fixture in 21st place following a 4-0 hammering at Wycombe that led to reports of a disturbance between Kewell and some of the club’s supporters. The Red Devils haven’t tasted success since a 1-0 win at fellow strugglers Morecambe in early 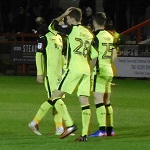 October, and have won just one home match all season when they beat Yeovil 2-0 in early September. They did manage a creditable 0-0 draw with free-scoring Luton, so clearly City will need to work hard to break them down. Goals are an issue with just 13 goals scored (two of them Own Goals) in the league this season, of which seven have come from Jimmy Smith (four) and Jordan Roberts (three). Dutchman Enzio Bouldewijn is generally considered one to watch.

Last season saw Crawley finally register their first ever win in this fixture, during City’s wretched home run at the start of the season – City dominated only to go down to a late Josh Yorwerth goal. The tables were turned in February as in-form City went 2-0 up through second half goals from Ollie Watkins and Jordan Moore-Taylor in front of a City support that included Spurs player Christian Eriksen, only to be pegged back in injury time through Mark Connolly, and only a magnificent save from Bobby Olejnik denied Crawley a totally undeserved point as City held on to win 2-1 (details here). The league head to head record sees City with eight wins, Crawley with just that solitary success and three draws.

Lee Collins has refereed four Exeter games, the most recent being the 2-1 win over at Accrington at the Park in January. All the games are listed at http://www.grecians.co.uk/wordpress/?s=%22lee+collins%22