The clamour had built up for City to start with Stockley and McAlinden up front, and last week against Grimsby Paul Tisdale did just that with the positive result that City arrested their recent League Two slide with a 2-0 win, the goals coming from the aforementioned Stockley and McAlinden. Tisdale 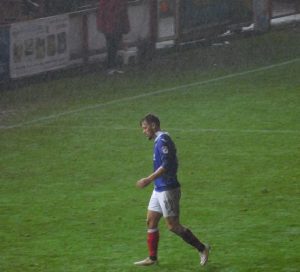 welcomes back Lloyd James from suspension for Saturday’s visit to the basement side, and he will likely return to the starting line up although that would likely mean one of Holmes or Moxey stepping aside, which would be harsh on either of them. Elsewhere the squad has had something of a threadbare look to it but the likes of Tillson and Harley must be getting close to a return to the bench.

With rumours of off-field issues, Chesterfield weren’t expected to make a quick return to the third tier after relegation last season, but few pundits would have expected the Spireites to be cast adrift at the bottom of the table. Gary Caldwell, after a spell in charge that yielded just three wins in 29 matches, paid the price for the poor start, replaced by club legend Jack Lester (when he played for them they were jokingly known as “Lesterfield”). Results, however, haven’t really picked up with Lester having recorded a solitary league victory against Crawley, but there were signs of life last week at Swindon when only a stoppage time penalty denied them a win. The one bright spot

has been the form of Kristian Dennis, who has eleven goals in all competitions (his nine league goals are more than the rest of the squad put together), while there are experienced players like Ian Evatt and Chris O’Grady who will relish the fight of a relegation battle.

The sides last met in the 2013/14 season which was one of contrasts as Chesterfield finished the season as champions and City battled against relegation. This was played out just before Christmas as Chesterfield had an early Christmas present with a 2-0 win at City (Banks and Richards with the goals), but City earned a valuable point in Derbyshire with a 1-1 draw – Matt Grimes put City ahead and it looked like City might hang on for three points when Sam Morsy was sent off, but the prolific Eoin Doyle levelled from the spot. Chesterfield have a healthy lead in the league head to head with 21 wins to City’s ten (11 draws).

Martin is in his first season as a EFL referee, and this will be his first time managing Exeter, but he did officiate at Chesterfield’s 5-1 defeat earlier this season at Crewe.