It seems like Saturday-Tuesday matches are following a pattern currently where City are away to one promotion rival on the Saturday then home to another on the Tuesday. However, unlike the visit of Notts County the other week, City don’t go into the match on the back of a defeat, having earned a hard-fought point at Wycombe on Saturday. One concern from that match was Hiram Boateng picking up an injury, which will likely mean Jordan Tillson returns to the position he has occupied for most of the season and one of Dean Moxey or Troy Archibald-Henville (assuming no return yet for captain

Installed as pretty warm favourites for promotion at the start of the season, Luton endured something of an up and down start to the campaign – winning 8-2 against Yeovil on the opening day then losing 1-0 at Barnet the next week, but since a heavy 0-3 reverse at home to Swindon over a month ago have been unbeaten and go into Tuesday’s “6 pointer” on the back of another thumping win, this time 7-1 against Stevenage. Nathan Jones has a huge budget at his disposal relative to the division, and will be under pressure to deliver promotion having, like City, fallen short in the playoffs last time. One major signing was James Collins, who bagged a hat-trick on debut and has seven goals to his name, the same tally as the irascible Danny Hylton. One familiar face will be Jack Stacey, whose late goal in the playoff semi has written him into City folklore – the former City loanee signed for Luton from Reading on a 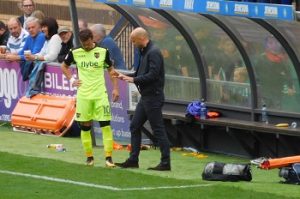 permanent deal in the summer.

Last season there was nothing to separate the sides in the league – the corresponding fixture last November saw City pick up only their second home point of the season with a 0-0 draw (a couple of weeks after Luton had won 3-1 at the Park in the FA Cup), while the return finished 1-1 – Jake Taylor put City ahead only for Hylton to equalise. Luton have a huge league head to head advantage with 25 wins to City’s 11 (14 draws).

The match officials are:

Andy has refereed five Exeter games, the most recent being Luton at St James park in December 2015. Details at http://www.grecians.co.uk/wordpress/?s=%22andy+davies%22.

Previous: Next Up: Wycombe Wanderers vs Exeter City
Next: FA Cup 2017/18: Grecians Paired With Heybridge Swifts in FA Cup Draw