If only the season finished in August, as City’s excellent start to the season sees Paul Tisdale’s side sitting pretty two points clear at the top of the League Two table following last Saturday’s epic comeback win at Cheltenham. What sort of side Tisdale will put out on Saturday depends on the outcome of the final day of the transfer window, although Kane Wilson, signed on loan from West Brom, will not be available as he is on England U18 duty. Stockley and Boateng are contenders for the starting line-up though. City’s injury list was added to in the 3-1 EFL Trophy defeat to Yeovil on

Tuesday night with Luke Croll sidelined, although fortunately what looked like a serious injury turned out not to be so bad and Croll hopes to be back in the next couple of weeks.

Although it’s ridiculous to suggest Saturday’s match is a “6 pointer”, Newport make the comparatively short journey to Devon sitting immediately beneath City in second place following a 4-1 demolition of relegated Chesterfield last weekend. Tipped to once again struggle and that win being their first home match of the season due to the notorious Rodney Parade pitch being re-laid, Mike Flynn’s side has kept up the momentum that saw the Exiles pull off a great escape last season. Flynn has sought to strengthen up front and ex-West Ham striker Frank Nouble 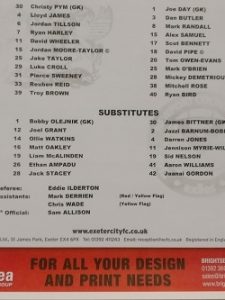 pitched in with a hat-trick last week, while Padraig Amond was signed last week from Hartlepool having been a goal machine in the Conference with Grimsby, and he too got on the scoresheet on his debut. City product Scot Bennett was on the bench last week and will hope to feature on his return to the Park.

Last season saw the visiting sides claim the spoils – Grand National day saw Newport arrive late, causing a delayed kick off, then promptly won the match 1-0 thanks to a goal from Tom Owen-Evans. It was a different story on New Years Eve as Ollie Watkins celebrated his 21st birthday in style with a hat-trick in a 4-1 thrashing, David Wheeler got the other for City while Sean Rigg’s goal for Newport was mere consolation. The sides are level in the head to head with two wins each (four draws).

Previous: Hiram Boateng joins the Grecians
Next: Next Up: Forest Green Rovers vs Exeter City