An opening day victory is always a boon, and City’s 1-0 win over fancied Cambridge sends Paul Tisdale’s side into Tuesday night’s Carabao Cup tie with Charlton in buoyant mood. This early in the season it would be daft to talk of players being “rested”, so expect to see Tisdale name as close to a full side as possible, with returning hero Dean Moxey likely to be given extra time to continue his recovery from the injury that has so far prevented him from donning the City shirt. 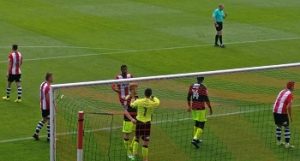 Charlton have, for the past couple of seasons, been filed under that fairly lengthy list of “clubs in crisis” due mainly to a massive disconnect between new foreign owners and the fans, a disconnect which has yielded a number of protests involving missiles of different types causing disruption to matches. The club’s relegation from the second tier in 2016 exacerbated this row, and last season ended up being a disappointing one, with a run of one win in fourteen in the latter part of the campaign putting paid to any hopes of a return to the Championship before a late revival pushed the Addicks back up to 13th. Karl Robinson, late of MK Dons, was brought in last season to look for a change in fortunes, and like City Charlton began the 17/18 season with a 1-0 win over Bristol Rovers despite playing most of the match with 10 men after ex-Huddersfield striker Lee Novak saw red. Novak will therefore miss the trip to Devon and Robinson may be tempted into changes elsewhere to keep his troops fresh for an assault on promotion.

Charlton were in League One throughout City’s brief tenure a few seasons back, although the clubs moved in opposite directions in 11/12 as City’s relegation coincided with Charlton’s promotion. The evidence was clear on the pitch as Charlton did the double (having endured City doing this to them the previous season). The 2-0 win for Charlton at The Valley (Bradley Wright-Phillips and Dale Stephens with the goals) was memorable more for Daniel Nardiello’s red card for threatening the linesman after 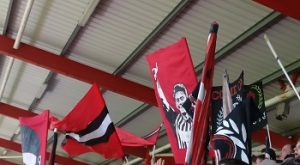 he (apparently wrongly) ruled that his shot hadn’t crossed the line. A solitary Danny Green goal at the Park sealed the points for the visitors. The sides have never met in the League Cup, their last cup match-up was in the infamous 02/03 season when fourth tier strugglers City visited Premier League “giants” Charlton. A Jonaton Johansson overhead kick gave the hosts the lead before Santos Gaia sent the travelling fans barmy with an equaliser. Johansson scored another bicycle kick before Jason Euell’s penalty give Charlton a 3-1 win.

Robinson has taken charge of seven Exeter games, the most recent being the game away to Yeovil on Boxing Day 2016. Details of all those seven games can be found at http://www.grecians.co.uk/wordpress/?s=tim+robinson

Previous: Connor Riley-Lowe Signs for Truro City
Next: Next Up: Swindon Town vs Exeter City