Dorchester Town FC have announced that they have taken on a long-term loan signings of Exeter City Defenders Jordan Storey and Kyle Egan. 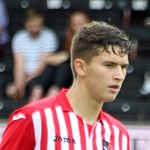 Jordan Storey, aged 19, was on loan to promotion winning side Tiverton Town at the back end of the last campaign where he impressed player/coach Scott Rogers. Jordan made just one appearances for the Grecians first team last season, coming on as a substitute for Pierce Sweeney in the EFL Trophy game against Oxford United.

Kyle Egan, aged 19, returns after a successful loan spell last season. Kyle made two appearances for Exeter’s first team last season, one on the EFL Trophy match against Oxford United and coming on as a substitute for Tom McCready in a L2 defeat at SJP to Hartlepool.

Both have been training with the Magpies and (subject to FA and League Ratification), are expected to feature on Monday’s first pre-season friendly away at Bradford Town (KO 7:30pm).

Dorchester Town entertain the Grecians in a pre-season friendly on Saturday 29th July at the Avenue Stadium.