Norwich City have confirmed that former Exeter City player Matt Gill has been appointed as their Under 23s manager.

Matt took over the role from Dmitri Halajko in February, and Matt played a prominent role in guiding City’s youngsters to the semi-finals of both the Premier League International Cup and Premier League Cup. 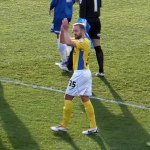 I really enjoyed the experience of last season so I’m really chuffed.

I worked with various age groups last year which gives me a really good knowledge of all the boys. It’s a great job for myself, being my hometown club, so I’m looking forward to getting stuck in.

Matt has a good way with the players and he’s proven to be a very adept coach.

Wherever you can, whenever possible, you need to try to promote from within. He did a really good job in the interim period last year and we’re looking forward to what he can do in the coming season.

Previous: Toby Down goes on loan to Weymouth
Next: Egan and Storey off to Dorchester Town on Loan