This weekend is the last chance to vote for a new inductee to the Hall of Fame, as voting closes at 5pm on Monday, July 3. Any new inductees will join Cliff Bastin, Jimmy Giles, Alan Banks, Tony Kellow, Dick Pym, Arnold Mitchell, Dermot Curtis and Reg Clarke. 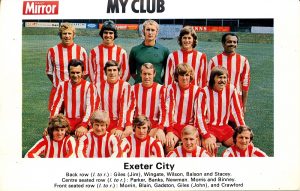 You can vote for one person, which can be any ex-player.

This year there will be 3 inductees into the Hall of Fame: one nominated by the club, one from the Supporters Trust’s History Group and one by the supporter vote.

There will be a special Hall of Fame event to induct the new members. The date of this will be confirmed later.

You can nominate anyone below, or by clicking here or by slipping a voting form into the box in reception.