Exeter City have confirmed that they’ve added a fifth pre-season friendly and so will be travelling to the Viridor Stadium to face Taunton Town on Thursday, July 20 in a 7.45pm kick-off.

The Peacocks, managed by Leigh Robinson, ply their trade in the Southern League Division 1 South and West. After finishing fourth last season, scoring over 100 goals, they went on to lose 3-1 to Tiverton Town in the play-off semi-final.

The Grecians faced Taunton Town in pre-season last year, with goals from Wheeler and Riley-Lowe giving City a 2-1 win. 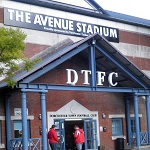